When Mike Pelfrey gave Miguel Cabrera an easy take for ball four in the bottom of the sixth, Cabrera gave Pelfrey a bit of lip. It was a bit of attitude, and as satisfying as it would be to think about plunking him his next time up for running his mouth for no real reason, you actually can't blame him for getting at least a little fired up. Great hitters don't like it when you take the bat out of their hands.

Prince Fielder took an uppercut swing at the very next pitch and launched it into the stratosphere, turning a 3-1 lead into a 4-3 deficit. The Twins, literally, did nothing after the Fielder bomb; nine up and nine down.

The Twins drop back to .500, and Mike Pelfrey continues to search for some consistency and a way to get the outs that he needs. 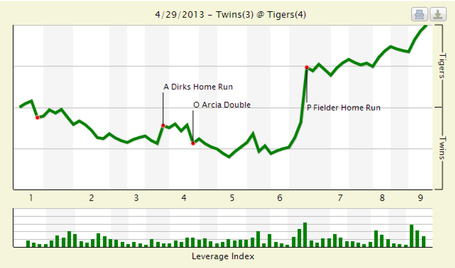