Looking at Vance Worley's first official start as a Twin.

I have to make this short, since college is starting to wrap up, but after watching the Twins opener I thought I'd give some quick impressions of Vance Worley.

The first few innings were rough, and I was worried that Worley was going to implode. He was having trouble with his command, but after he got comfortable he saw improvement. He relied heavily on his sinker, he threw it nearly half the time, compared to last season when he threw it just over a third of the time. This was just one start though, so we can't look into that too much, but it is worth noting.

With sinkers come groundballs, and boy did Worley do a good job at inducing them. When Worley threw his sinker, balls were put in play nearly 20% of the time. Of those balls put in play, just over 80% were groundballs. If you were watching the game, that should come as no surprise.

His four seam and slider also were exceptional as the game went on. While they didn't generate as many groundballs, they still resulted in them half of the time per balls in play.

He didn't generate a very large amount of whiffs, but that isn't something new. None of Worley's pitches averaged over 20% whiff/swing% in 2012. 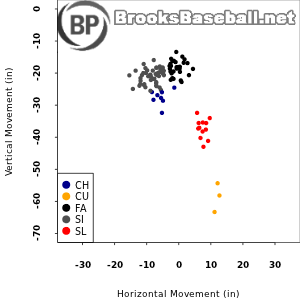 Worley's PITCHf/x charts look fairly similar to year's past (which is good), but his slider appears to have slightly more movement. It'll be interesting to see how that holds up as the year goes on.

While the Twins did lose the game, Worley definitely looked a lot more comfortable as the game went on. Personally I'm not putting that loss on him, especially since the offense had chances later in the game. As long as he stays healthy I'll look forward to seeing how he pitches, and what kind of adjustments he makes in the American League Central.

All data is from Brooks Baseball and FanGraphs