Fischean will be back tonight with a full recap, but here's your immediate reaction.

The Twins win on a walk-off! From Eduardo Escobar! Let's let that sink in for a minute, but then go back to celebrating like we just won the world series! Honestly, I actually loved seeing the guys all storm the field as Brian Dozier scored the winning run all the way from first base. Just fantastic. 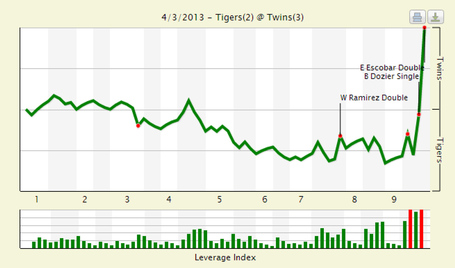 The Twins' win expectancy went from 46.9% to 100% on Escobar's double off the base of the wall in left center field. Thanks for not catching it, Austin Jackson!