Twins take two of three from AL Central favorites to win their first series of the year.

Mike Pelfrey pitched around a big situation or two and had big time support from his offense as the Twins put together a complete package win. Josh Willingham smashed a two-run homer in the third to tie the game at two, and Trevor Plouffe followed up with his own solo shot in the fourth to put the Twins up for good. The offense exploded for five runs in the eighth to put the game away.

A lot of credit needs to go to the bullpen in the seventh, as Josh Roenicke got into trouble but picked up a big strikeout with runners on second and third with nobody out. Tyler Robertson struck out Prince Fielder with the bases loaded and then Casey Fien came on and induced a Victor Martinez pop-up to end the threat. 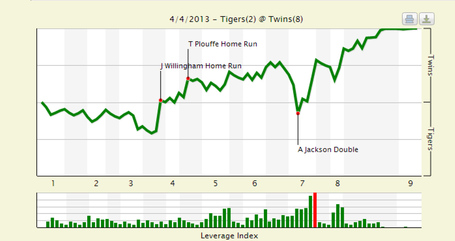