With the exception of that ugly three-run second inning, Pedro Hernandez was actually pretty good. He faced the minimum in the first, fourth, and fifth innings en route to what we might dub "The Minnesota Twins Quality Start". He allowed four hits over five innings, walking three and allowing just the runs he surrendered in the second. J.J. Hardy was the only Oriole to leave the yard.

At the plate, Justin Morneau's bases-loaded double scored a pair in the third. Chris Parmelee added another on a sacrifice fly to tie the game in the seventh, and Aaron Hicks singled on the very next pitch to bring home what would ultimately be the winning run.

In short: the Twins win! AGAIN! The Twins also win the series. AGAIN!

Here's a list of our Top 10 commenters from today's game thread. 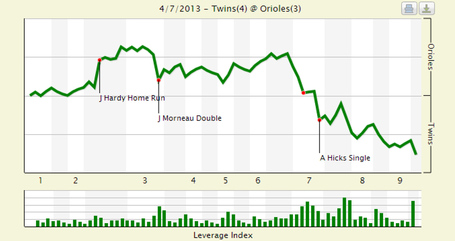