Kevin Correia was a magician again this afternoon. Once more he induced double-digit ground outs, and after seven strong innings he actually stood as the better between himself and Royals starter Ervin Santana. But he came on for the bottom of the eighth, couldn't hit his spots, and by the time Gardenhire had someone up in the bullpen it was too late. Jared Burton couldn't stem the bleeding and the Royals scored three; the second run was allowed by Burton but was charged to Correia.

At the plate the Twins were just as mystified by Santana as Kansas City had been by Correia for most of the game. Joe Mauer had a pair of singles (although having one come in the fifth with two on and two out would have been better), and Chris Parmelee notched a pair of hits and a one-out walk in the ninth. 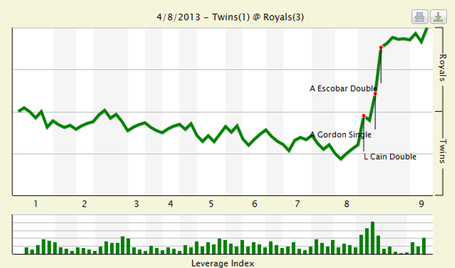 GameHub: Pregame, Game Thread and Recaps for Twins at Royals