The powerful Detroit line-up was too much for Vance Worley to handle tonight.

Vance Worley lasted only 4.2 innings against the Detroit line-up tonight, giving up 10 hits, including a trio of dingers to Miguel Cabrera, Prince Fielder, and Alex Avila that buried the Twins early on. Although initially the Twins came back to tie it 1-1 in the 2nd inning with an RBI double from Wilkin Ramirez that scored Justin Morneau, it turned out to be the only run of the day for the Twins.

Six runs in 4.2 innings, when your team is facing Justin Verlander, is apparently a bit much for the Twins to overcome.

Verlander, you win the duel--this time. 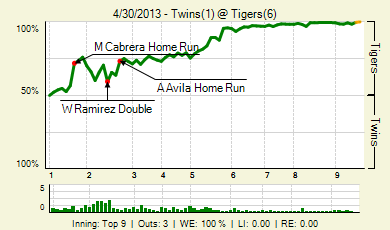