Baltimore pounces early and often against Scott Diamond while the Minnesota offense stalls.

Scott Diamond didn't have his best stuff today. He wasn't able to hit with his fastball or off-speed pitches on a regular basis, and far too often caught far too much of the plate. On those occasions where the Twins had opportunities to put a rally together, Wei-Yin Chen and a quadra Orioles relievers stymied their efforts to the full. Minnesota had runners on base in all of the first eight innings, including four leadoff base runners in the first five innings and runners on second base in the sixth, seventh and eighth, but at every turn they were denied.

As I mentioned in the game thread, this is one of those games where detractors might hold it up as an example of the massive holes in this Twins roster: a Twins pitcher with mediocre stuff who can't get away with bad pitches, a roster that relies of more than a handful of sub-par hitters in order to score runs, and a lack of depth for late-inning pinch hitter replacements. All are things that we knew coming into this season, but that doesn't make it easier to handle on days like today. It was a tough one to watch in terms of the sheer futility that the team ran into at every turn.

Hopefully the Twins can turn it around and get more wins than losses this week as the Twins host the White Sox and Red Sox at Target Field. 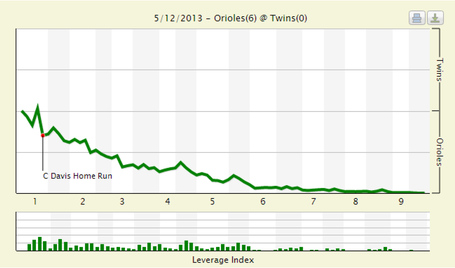