How does an absolute pasting of the Chicago White Sox feel? Better than Christmas morning.

It didn't start well. Chicago scored two off Pedro Hernandez in the top of the first. But then Pedro settled down. And the Minnesota offense settled in.

The White Sox handed the Twins their first run after they loaded the bases (thanks, Alexei Ramirez!), but two batters later Trevor Plouffe laced a double in the left-center field gap for two runs to put the home team up 4-2. It would only get better.

All your center field are belong to Aaron Hicks.

Minnesota put the game away in the eighth when Deunte Heath walked Josh Willingham with the bases loaded, and then Justin Morneau did him a favor and cleared the bases with a ripped double. When the dust cleared the score was 10-3. And that, my friends, is a kick ass mother f*****g win. 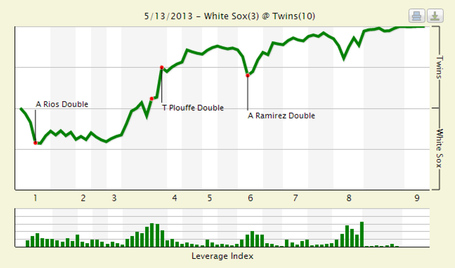