A pair of dingers in the second inning were the difference maker for the White Sox.

Kevin Correia didn't really do that bad today. He threw fewer than 100 pitches through 7 innings while surrendering only two runs on back-to-back solo shots by Adam Dunn and Danyan Viciedo in the 2nd inning. Unfortunately, Correia came back out for the 8th and proceeded to give up back-to-back doubles that resulted in two more earned runs and a Twins loss.

The Twins scored their first run in the 5th inning largely due to a gift from home plate umpire Jordan Baker. Justin Morneau led off the inning with a double and came around to score on a hit from Oswaldo Arcia--but replays showed Chicago catcher Tyler Flowers actually tagged Morneau once, if not twice, before Morneau got his hand on the bag. Score one for the Twins, lack of instant replay complainers.

Trevor Plouffe tied the game in the 7th inning with an RBI single that scored Josh Willingham--but alas, the dinger-less Twins were unable to score any more off Chicago relief pitchers Jesse "Y U NO WRECK ANYMORE?" Crain and Addison "I Legit Just Thought His Name Was Allison" Reed. 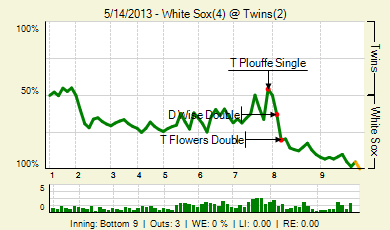