On Kent Hrbek's birthday, against the Atlanta Braves, the Twins couldn't pull out the win. In a tie game in the bottom of the 10th inning, Braves Freddie Freeman hit a single to right field that allowed Jason Hayward to score and win the game 5 to 4.

Twins starter Mike Pelfrey gave up 2 earned runs over 2 innings to start off the game--but then an hour or so rain delay cut him off. Anthony Swarzak pitched most of the game (once again), going 4 innings with only 3 hits and 1 earned run. Swarzak has certainly been proving his worth this season. Casey Fien and Jared Burton both pitched two scoreless, walk-less, innings to give Glen Perkins the chance for a save.

Unfortunately, tonight was Glen's first blown save of the year. Perkins gave up a run to tie it, and Brian Duensing surrendered the final run to blow it. 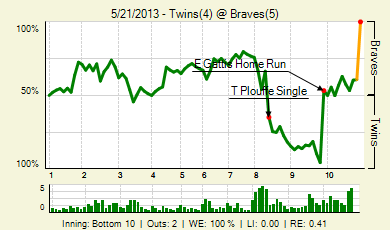