Tigers 7, Twins 6: Valiant Efforts in a Game Decided By Inches

Share All sharing options for: Tigers 7, Twins 6: Valiant Efforts in a Game Decided By Inches

When Miguel Cabrera launched a line drive, two-run homer in the bottom of the first, admit it. You thought the game was over. I did. For the fourth time in the last six games, the Twins starter allowed at least one run in the first inning. That's a tough position for a team like the Twins to be in.

But the Twins fought back. Jhonny Peralta should have been charged with two errors tonight but gets away with one, allowing Minnesota to plate one in the second instead of turning an inning-ending double play. The error Peralta was charged with, a throw that went about 20 feet over Prince Fielder's head, didn't come back to haunt the Tigers. Minnesota scored four times in the top of the third, when Mauer singled with runners on second and third and Josh Willingham cracked a three-run homer to put the Twins up 5-2.

Scott Diamond regained form after the fist, but escaped trouble in the fifth and the sixth with a little help from Casey Fien. Willingham homered again in the seventh to push the lead back to three, and then came the bottom of the frame. Torii Hunter and Miggy C. bristled emptily at a couple of Fien's pitches; Hunter struck out and Cabrera walked with one out. Brian Duensing entered to face Fielder, who chopped a weak grounder but right up the middle. Victor Martinez then flared into shallow right-center field. Aaron Hicks laid himself out but just missed the catch. Peralta doubled when Jared Burton came on to stem the tide.

In the bottom of the eighth Fielder hit a comebacker that Burton deflected. It forced Brian Dozier to change direction and dive for the grounder but it dribbled away into right field, scoring what was ultimately the deciding run.

Joe West is an awful umpire, too. I'm sure somebody on the internet has documented this four or five hundred times. His strike two call against Justin Morneau in the top of the ninth was at least six inches outside.

Not that I want to blame anything on the umpires. The Twins blew this one with a little help from bad luck.

The good news: misery loves company! And there were a lot of us chiming in on the game today. 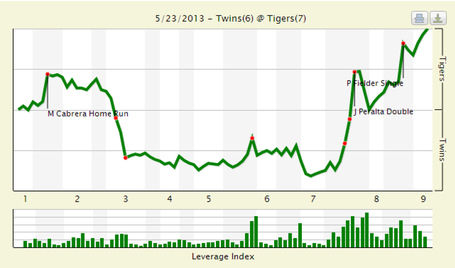