Correia has his best start of the month.

If you're a Twins fan get on your knees and pray that Angel Hernadez doesn't review this.

Kevin Correia didn't look like he was going to pitch well today. In the bottom of the first he walked Norichika Aoki on five pitches, Jean Segura fought him off until he was able to line one up the middle, and then he plunked Carlos Gomez with a 2-2 fastball. Yet the Brewers didn't score. It turns out that was more of an indication for how Milwaukee's afternoon would go.

Yuniesky Betancourt smashed a hard liner right to Pedro Florimon, who flipped to Brian Dozier to complete a double play. Aoki didn't have a chance to go anywhere. Somebody named Jeff Bianchi then struck out to end the threat, and that's how Correia walked off the mound unscathed.

Gomez homered to lead off the fourth, and then was the second half of a back-to-back homer pairing in the sixth when Segura hit his eighth bomb of the year. Those were all the runs the Brewers would get, and they're a great example of how home runs aren't that big of a deal as long as the bases are empty.

Justin Morneau continued his hot month of May by pushing a bouncing ball through the left side in the top of the first to score Joe Mauer. Pedro Florimon and Ryan Doumit combined to drive in three, meaning that even after the back-to-back shots from the Brewers the Twins were still leading 4-3. Joe Mauer homered off of the yellow padding in left field in the seventh (credit Angel Hernandez and crew for actually getting the review right this time), and Chris Parmelee took Burke Badenhop deep to extend Minnesota's lead to our final score. 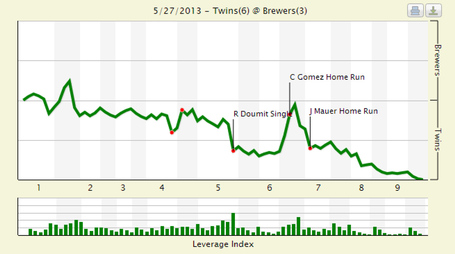