The Twins hit three home runs to help give them a one-run lead going into the bottom of the ninth--but the game turned out to be far from over.

Ryan Doumit, Josh Willingham, and Aaron Hicks each hit a home run tonight in what at first seemed to be a fairly probable win for the Twins. Aaron Hicks was the star, robbing super freakishly hot-hitter Carlos Gomez of a home run in the bottom of the 2nd, before hitting his own in his next at-bat. It was a performance reminiscent of his break-out game against the White Sox on May 13th.

The Brewers scored three runs in the bottom of the 4th inning on RBI doubles by Aramis Ramirez and Jonathan Lucroy, and then tied the game in the bottom of the 5th on a Ryan Braun RBI triple. The game remained tied until the top of the 8th when Justin Morneau drove in Brian Dozier on a sacrifice fly to give the Twins a one-run lead.

The Twins held this one-run lead going into the bottom of the ninth, sending out Glen Perkins for the save opportunity--but the game suddenly started to get sloppy.

Perkins gave up a succession of singles that ended up blowing the save and tying the game. Brian Dozier led off the 10th inning with a solid single, only to get thrown out by about two miles in an attempt to steal second on a third pitch strike to Joe Mauer. Pedro Florimon walked, then advanced to second on a sacrifice bunt--only to try and reach third base on a ball hit directly in front of him to shortstop Jean Segura, who easily threw him out at third. Balls were hit in the general direction of Ryan Doumit in right field.

Despite the Twins multiple blunders, they were able to win largely because of an absolutely fantastic performance by the bullpen (except Glen Perkins). Anthony Swarzak and Ryan Pressly gave back-to-back 2 inning, hit-less, walk-less, score-less performances on 15 and 20 total pitches respectively. Brian Duensing got the save in the bottom of the 14th after the Twins scraped together a run in the top of the inning with a ground rule double by Hicks, a Floriomon sac-bunt, and Eduardo Escobar sac-fly. It was the first save of Brian Duensing's career.

The game ended at 11:53 pm--avoiding weird baseball by a mere six minutes. 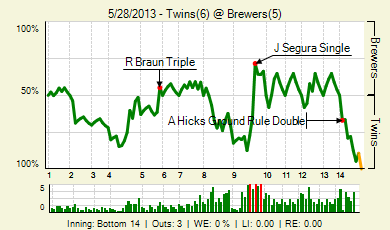