Samuel Deduno pitched 7 innings with only one earned run tonight, while Aaron Hicks made another great catch followed by a home run, propelling the Twins to a 4-1 victory over the Brewers. The win was the Twins 3rd win a row. Three. Wins. In. A. Row.

The Twins got the scoring started early in the bottom of the first and never looked back. Eduardo Escobar and Brian Dozier both singled to start off the inning, and were driven home on a Ryan Doumit double. Newly called-up catcher Chris Herrmann later singled to score Doumit and put the Twins up 3-0 going into the second inning.

In the top of the second, Carlos Gomez led off hitting a ball that looked like it might have been a home run--but Hicks jumped up and robbed Gomez again! Er, except Hicks dropped the ball on the way down and Gomez reached 2nd base. Gomez then scored what would be the Brewers' only run of the game on a ground ball from Yuniesky Betancourt.

After just missing what would have been a brilliant catch of Gomez's double, Hicks went on to redeem himself in the top of the 4th inning with a Ben-Revere-esque diving catch to rob Rickie Weeks. Then, like clock work, Hicks hit yet another home run in his very next at-bat. It was Hicks' 6th home run of the year, which is second most on the team behind Josh Willingham's 8 dingers. Switch-hitting Hicks now has 3 home runs from the left side and 3 home runs from the right side.

The scoring was done after Hicks' dinger, but a noteable highlight did come in the top of the 8th when Chris Parmelee made an absolutely fantastic catch of a Carlos Gomez pop-up that sent him tumbling into the Twins dugout--and Twins Centric's Parker Hagemen into total euphoria.

Glen Perkins came in to shut down the game in the 9th--and this time, unlike last night, he successfully completed his task. 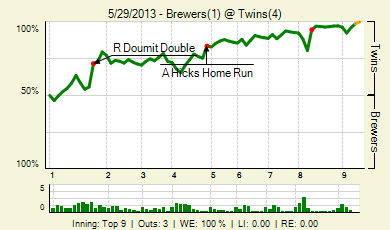