Mike Pelfrey was due. Let's be honest. His first start of the year was strong even though he didn't get through the sixth inning, but since then we saw four pretty rough starts in a row. Today, however, was a good day. He struck out seven, walked one, and allowed just one hit and a solitary run over six innings. The only time he looked like he was in any danger was the fourth, when he allowed three of his four hits and the Indians scored their first run on a Mark Reynolds sacrifice fly.

The Twins were ahead all afternoons. Trevor Plouffe pulled his fourth home run of the year into the left field seats, a two-run shot. Justin Morneau added an RBI single later, although Josh Willingham's head was turned around the wrong way and so he didn't see the stop sign and was tagged out at third base. Joe Mauer stroked a liner into the left-center field gap for the Twins fourth run of the game.

The Twins improve to 13-14, and visit to my city of Boston for a four-game set starting tomorrow. I'm hoping to attend at least two! 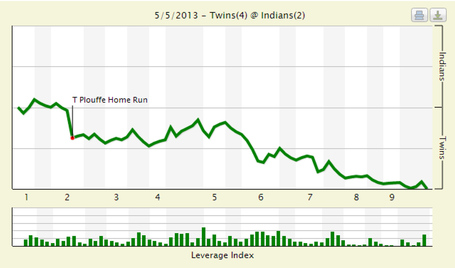