Saturday Notebook: Photobombs, The Sword Is Mightier Than The Pen, Forgotten Starts, and More

Today's Saturday Notebook looks at some excellent photobombing techniques by the Cincinnati Bearcats college baseball team; Reds manager Dusty Baker wanting his players to fight but swearing is not okay; the forgotten positions that some players used to play when they were younger, and more.

Share All sharing options for: Saturday Notebook: Photobombs, The Sword Is Mightier Than The Pen, Forgotten Starts, and More

That same day that I posted my cutters article on the Twins pitching staff, P.J. Walters took the mound for the Twins. He was a rather uninteresting pitcher that joined the organization prior to last season, as he had an ERA in the 7s and was allowing nearly 2 home runs per 9 innings. His overall numbers last year for the Twins weren't really that great, but nevertheless his first 4 starts helped bring some stability to the tumultuous rotation and he did finish the season strong. Anyway, I was watching Thursday's game with Walters pitching and that's when I discovered this...

Oops. I guess I totally ignored FanGraphs, PITCHf/x, and watching Walters on TV last season in identifying that he also threw a cutter. To further embarrass myself, MLB.com's Rhett Bollinger even wrote about Walters upon joining the team and said that Walters featured a cutter in his repertoire. Oh well, I guess it's better to learn than be oblivious forever. 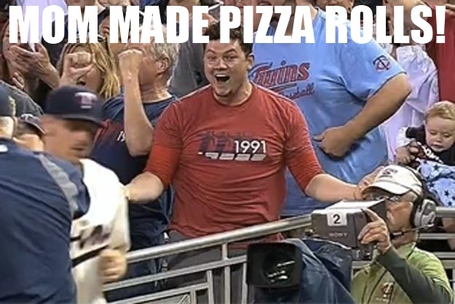 3. Finally, how bad was Vance Worley trying to get himself back on track? So much that he attempted to hide his pitches in a cloud of rosin.