After clobbering the Sox in a four-run first inning, the Twins almost let this one slip away... Thankfully, they Doumit (see what I did there?)

Share All sharing options for: Twins 7, White Sox 5: Doumit Does It! Breaks Tie in 8th Inning to Avoid Embarrassing Loss

The way this game started, it looked like the Twins were going to just steamroll the White Sox tonight. Clete Thomas reached on a throwing error by Gordon Beckham. Joe Mauer launched a home-run to left field, his seventh of the year. Josh Willingham and Justin Morneau both reached, sitting at third and second respectively. The White Sox coaches made a call to the bullpen, and went to visit starter John Axelrod on the mound.

I really thought the White Sox were about to pull their starter with one out in the first inning.

Axelrod, however, stayed in the game--which was good because he then walked Oswaldo Arcia and gave up a two-run single to Trevor Plouffe, putting them on second and first respectively. Arcia was then thrown out at home on a weird play for the third out.

After throwing a three-up, three-down first inning on 11 pitches, Mike Pelfrey unfortunately started to Pelfrey', giving up a double to Paul Konerko and an ensuing home run to Conor Gillaspie. Pelfrey had a good start overall, however, giving up only one more run in the 5th inning that was partially thanks to Clete over running a ball and letting it fall behind him.

The Twins and the Sox then went back and fourth a bit, piranha-ing a couple runs off each other. The Twins were still ahead 5-4 going into the top of the 8th inning, but then Paul Konerko (*first towards the sky* KOONNEEERRRKOOO!!!!!) tied it up with an RBI single.

But then, with two outs in the bottom of the 8th inning, the Twins mounted a rally against White Sox reliever Ramon Troncoso. Clete drew a walk off, followed by a single from Joe Mauer. Doumit then followed through with his game winning, two-out, two-run double to put the Twins up 7-5. 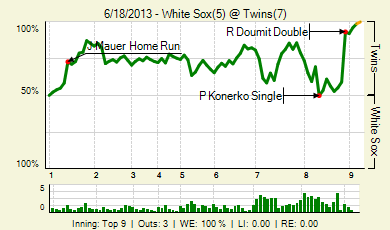