The Twins offense stumbled tonight, as pitcher Kevin Correia gave a quality start, but had no runs to back him up for the win.

Share All sharing options for: Marlins 4, Twins 2: Um... At Least We Got to See the Dinger Machine?

Really? Against the Marlins? Really, Twins?

Kevin Correia turned in a quality start--his third in the last four outings--but the Twins still lost. Kevin only gave up two runs, but, some how, that was enough for the worst team in baseball to beat the Twins.

Former Marlin and current Twin, Josh Willingham, produced the first Twins RBI in the third inning on a two-out RBI that scored Clete Thomas. The only other Twins RBI was scored by Trevor Plouffe in the 8th inning, when he managed to drive in Joe Mauer. The lack of offensive production--rather than the pitching performance--was the real problem for the Twins.

The Marlins scored their first three runs in the bottom of the 6th inning, on a single from Marcell Ozuna that was accompanied by a Clete Thomas error in center field (we want Byron Buxton Aaron Hicks!!!). Trevor Plouffe was able to drive in another run in the top of the 8th inning, but then Marlin Marcell Ozuna hit a dinger in the bottom of the 8th to seal it up for the Marlins (also allowing us to see the Miami Marlins Dinger Machine in action, which is a purely glorious sight). 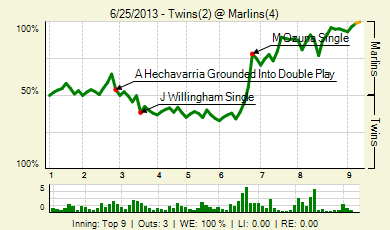