Samuel Deduno pitched 6 scoreless inning for the Twins tonight, with 5 strikeouts and 2 walks--and he didn't even hit a batter in the process!

Samuel Deduno pitched an excellent 6 innings for the Twins tonight, allowing only 4 hits, in what would come to be the Twins' first back-to-back shout-out games since 2010. Ryan Doumit hit his 7th home run and drove in another RBI in the 5th inning, resulting in two of the Twins' three runs. It made for a great game for the Twins, and a very depressing one for the Royals. It was the Royals' club-record 11th home loss in a row.

After having walked everyone and their mom, but not yet given up a hit, Royals starter Luis Medoza surrendered a home run to Ryan Doumit in the top of the 4th inning. Doumit then got another RBI, and the third run for the Twins, in the top of the 5th on a line drive that scored Josh Willingham. Willingham had driven in the second RBI of the game just before that on a line drive that scored Joe Mauer, who had hit another double (not a home run).

Aaron Hicks had a chance to really break the game open against one-time, first overall draft-pick Luke Hochevar in the top of the 5th, but Hicks instead popped out to end the inning. Because full bases for the Twins = A TRAP.

Including tonight, the Twins have won seven of their last eight games.

Only top 5 tonight, although there were enough people to do top ten. If you aren't listed, sorry--engage more during the game! We don't bite! 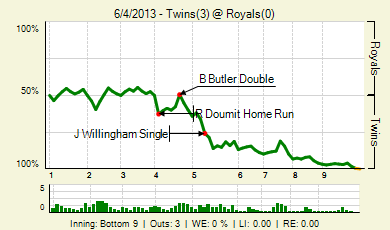