The Twins had another good first inning start, but the Royals soon caught up, and then buried, the Twins.

The Twins scored three runs in the top of the first inning tonight, two of which were on another home run by Ryan Doumit, his 8th of the year, but that was all the Twins could muster. The Royals ended up scoring two runs in the 2nd, one in the 6th to tie the game--and then buried the Twins for good with another four runs in the 8th.

The game started off with a series of gifts from the Royals. Jamey Carroll, leading off, reached second on a throwing error by Mike Moustakas. Joe Mauer--gasp--grounded out. Josh Willingham then struk out--but, being the non-lazy person that he is, actually reached first base on a wild pitch anyway, which scored Carroll. Ryan "Donut" Doumit then hit a home-run, scoring Josh Willingham and himself (as pictured above).

Twins starting pitcher Mike Pelfrey turned a 1-2-3 inning in the bottom of the first, but not in the bottom of the second. Pelfrey first gave up three singles to Billy Butler, Mike Moustakas, and Lorenzo Cain that left them on 3rd, 2nd, and 1st base respectfully (see: Billy Butler, base clogger). The Royals next batter, David Lough, grounded out to Jamey Carrol at third base, who got a force-out of Billy Butler at home. Everything was great, until Chris Getz singled on the next at-bat, scoring two Royals runs.

Things were looking good okay for the Twins until he 6th inning, when Eric Hosmer double and was driven in on a Salvador Perez single to tie the game. The Twins did not pose any sort of offensive threat after that--and once the Royals scored four runs in the bottom of the 8th inning, the game was basically over.

But, um, how about that Kohl Stewart? 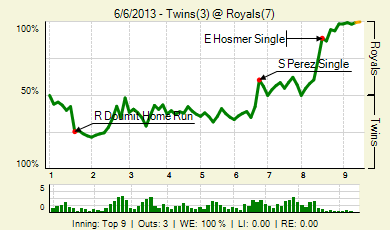