Saturday Notebook: Biogenesis, The End, Misdiagnoses, The Undesirables, and More

Today's Saturday Notebook looks at how MLB is handling the Biogenesis scandal in the wrong way, Ramon Ortiz's heartbreaking reaction to injuring his elbow, the Nationals joining the Twins in mishandling injuries, how the Mets and Triple-A Las Vegas are a match that neither wanted to make, and more.

Share All sharing options for: Saturday Notebook: Biogenesis, The End, Misdiagnoses, The Undesirables, and More

I'm not going to preach too long here in my introductory monologue, but I do want to offer up a comment on some big MLB news that happened earlier this week. Perhaps the only thing that could be bigger than the MLB Draft on Thursday was the announcement that MLB is planning on suspending around 20 players for connections to Biogenesis, a Miami-based clinic that has been recently shut down for providing PEDs to those athletes. Some of the biggest names involved include Alex Rodriguez and Ryan Braun.

A big key to obtaining the names from Biogenesis was created by MLB striking a deal with the head of Biogenesis, Anthony Bosch. In exchange for legal safety (and perhaps some cash as well) Bosch handed over his records to commissioner Bud Selig and Co, and in doing so, has created the biggest crackdown on PEDs since the Mitchell Report.

Except... MLB got it all wrong. Again.

Flash back to the Mitchell Report. Although it also provided suggestions to Bud Selig as to how MLB could clean up its steroid problem, the document's focus was far more prominent in regards to naming current and former ballplayers that had used PEDs. In doing so, the Mitchell Report was used more to accuse and shame baseball players, instead of solving the real problem, which was how and why players got into steroids in the first place.

Back to Biogenesis, the exact same thing is happening now. The plan appears to be to name those that were connected to Biogenesis, instead of researching how a similar incident can be avoided in the future. We could even go a step further and say that MLB's plan to suspend some or all of these players for 100 games - equal to a 2nd PED suspension even though it would be the first for many - is based more on revenge for Ryan Braun beating his positive test back in 2011-2012 and public shaming than it is on cleaning up the game. The player's union will certainly not take kindly to having its players suspended for longer than is allowed in the Collective Bargaining Agreement, and getting revenge on a player for embarrassing MLB due to identifying a simple chain of custody breach is petty.

Instead of making examples of its highest profile players and using them as an excuse that they are doing sufficient work, MLB could achieve so much more by learning how players get involved in steroids and shutting down those avenues, instead of suspending people left and right. In the past, it was clear that 10-game suspensions weren't enough to deter players from using PEDs. Currently the 50- and 100- game suspensions haven't been enough to stop players from looking to gain an edge. The solution is not to ramp up the penalties even more or to suspend every suspect in sight. After all, these suspensions are only going to the worst cheaters, as in the ones that were dumb enough (or associated with someone dumb enough) to get caught. Lance Armstrong used PEDs, and he continued to use even while his teammates and rivals were suspended, because he hid it far better than everyone else. There should be no doubt that MLB is populated with Lance Armstrongs as well, and two examples of players that are not this formerly champion cyclist and master of secrets are A-Rod and Braun.

MLB can achieve so much more in this fight against PEDs by learning why players are driven to cheat, how they learn to cheat, where they receive their drugs, etc, which would eventually aid in preventing players from becoming the next Armstrong. Unfortunately, they seem far more content with catching Lance than stopping Players A, B, and C from becoming Lance.

* An usher talked with a Twin Cities scribe about his/her distaste of Ramon Ortiz. The scribe later wrote an article and quoted the usher as a "Twins official." That did not go over well.

Just as good is that Babe did a faceplant at the finish line. 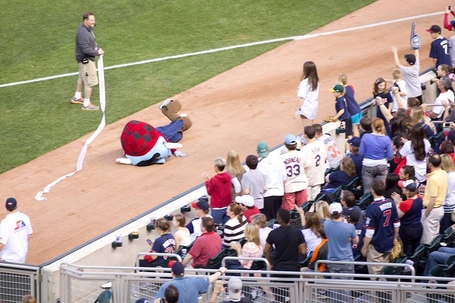 3. We've seen some weird batting stances over the years, such as Tony Batista, Aaron Rowand, Brandon Phillips, and more. The latest claim to fame in the batter's box goes to Coastal Carolina's Alex Buccilli.

4. Earlier this season it was Jordany Valdespin with a HBPiD, and now it's this player from Cal State Fullerton. (Use context clues to figure out what HBPiD means... or just watch the video).

5. Finally, this not-really-my-type-but-still-attractive female Royals fan attempted to get a baseball during the game, but was instead sniped by a kid. While her reaction is priceless (and admittedly out of context as she actually returned to her seat laughing about losing the ball to a child), the reactions of everyone else in the clip is just as amusing. Yes, from the dudebro with the wristband fist-pounding the air twice, to the weird woman chewing her ballpark food as she appears from behind the man in the blue t-shirt, to the little girl that is blissfully ignorant of her surroundings.