Samuel Deduno pulled a Radke and the Twins hit three home runs to lift themselves over the Yankees in the Bronx. Yes, you read that correctly.

The way this game started, it looked as if it would be another typical Yankees drubbing of the Twins. The Twins were quickly retired in the top of the 1st, and Samuel Deduno gave up an Ichiro "Ichiro" Suzuki double and Robinson Cano single in the bottom of the inning to put the Twins behind 0-1.

Turns out, that would be the only run and lead for the Yankees in the game.

Trevor Plouffe turned things around quickly with a solo shot in the top of the 2nd off Yankees starter Phil Hughes. The game remained tied until the top of the 7th inning when Ryan Doumit hit another solo shot off Hughes. Things got a little dicey for Deduno in the bottom of the inning when Aaron Hicks missed a fly ball from Travis Hafner that fell for a double, but the next two batters grounded out in a fine display of pitch-to-contact by Sammy.

Aaron Hicks redeemed himself by leading off the 8th inning with a single. Clete Thomas then had an infield hit, but was called out for interference with something. It was a bull[crap] call to everyone including Stevie Wonder. Ron Gardenhire was ejected. Pedro "P-Flo" Florimon came up next and hit a dinger to right field, putting the Twins up 4-1. 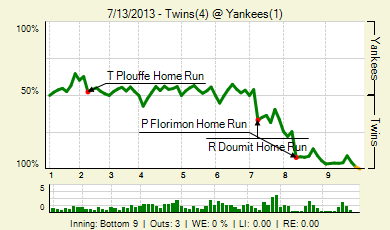