Joe Mauer left for Minneapolis just before the game to return to his wife, now in labor with their twins. But watch out Joe--you might have just been Wally Pipped by Chris Herrmann.

Chris Herrmann was informed only 30 minutes before the game that he would be the starting catcher tonight. Luckily, Herrmann has caught rookie Kyle Gibson throughout his minor league career and knew what to expect. Even then, he brought it up a notch--Herrmann hit his first professional grand slam (video, it's beautiful) in the 10th inning to ultimately help the Twins cream the Angels 10-3.

Pedro "P-Flo" Florimon scored the first run of the game for the Twins in the third inning off a Brian Dozier single. The Angels tied it up in the bottom of the 4th on an Albert Pujols home run that Aaron Hicks just nearly caught (in fact, his glove fell over the fence and there was a moment delay for a worker to retrieve it). Two outs later Mark Trumbo hit a no-doubter to put the Angels up 2-1.

The Twins tied it up in the top of the 7th. Clete Thomas singled, Chris Herrmann singled, and Aaron Hicks bunted to move the runners over so that, in true Twins style, P-Flo could hit a RBI ground-out to tie the game 2-2.

The Twins got ahead again on a Ryan "Donut" Doumit double in the 8th, thanks to an AMAZING home-plate slide (video) by Justin Morneau who scored the run. The game remained 3-2 until the bottom of the 9th when Twins all-star closer Glen Perkins blew the save.

Luckily, however, Glen only tied the game, and didn't lose it, so it moved on to the 10th inning--where the Twins exploded.

Herrmann hit a grand slam--first in all of his professional career, and the first for the Twins this year. Aaron Hicks followed with a single, driven in by a another home run from our man P-Flo.

THAT, is how you congratulate Twins Joe Mauer's twins entering the world! 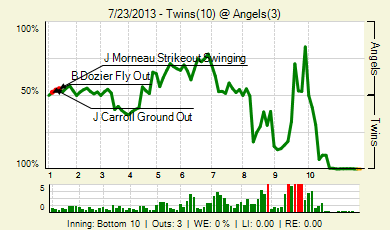