Chris Colabello hit his first major league home run to put the Twins ahead in the 13th inning, and Glen Perkins shut it down in the bottom half for the win.

At the beginning of the 9th inning, the Twins looked out of it. Down 0-1, Mariners ace Felix Hernandez came out to finish up what would have been his first complete game shut-out of the year. The Twins had not scored a run off Hernandez since 2011.

However, what was at first a rather boring game became a rather interesting one when Trevor Plouffe hit a line-drive single to score Pedro Florimon and tie the game. King Felix finished the 9th, but after the Mariners failed to score in the bottom of the inning he did not return, and had to live with a no-decision for his 9 innings of rather stellar baseball.

The game's hero, thankfully, was Chris Colabello. After an Aaron Hicks lead-off single to start the 13th, Colabello launched a two-run shot into right field--his first career home-run in the major leagues. Glen Perkins gave up a solo shot to Mariner Kendrys Morales in the bottom of the inning, but was ultimately able to hold on for the 3-2 Twins win. 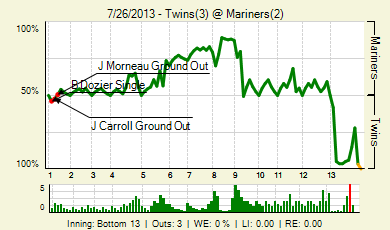