Samuel Deduno had his best start of the year so far and nearly every Twins player walked in today's 4-0 win over the Mariners.

Share All sharing options for: Twins 4, Mariners 0: Twins Walk All Over Mariners

Samuel Deduno was strong yet again for the Twins today, throwing 7 scoreless innings with only three hits and three walks. Luckily, the Twins offense showed up for Deduno too, but largely in the form of the Mariners' lack in defense. The Twins first run in the top of the 4th inning came thanks in part to a missed pop-up catch by second baseman Nick Franklin and subsequent botched throw to third by right fielder Endy Chavez. (Cue circus music.)

The Twins walked all over the Mariners pitching staff as well--every Twins batter had one walk except for Brian Dozier. Most notable was the walk to Aaron Hicks with the bases loaded, driving in the Twins second run of the game (and the bases had been loaded--you guessed it--by walks to the two batters proceeding Hicks).

Brian Dozier and Justin Morneau both hit solo home runs in the later innings to round out the Twins scoring. For Justin Morneau, it was his 212th career home-run, which nudges him past Bob Allison into the fourth spot on the Twins all-time home run list. 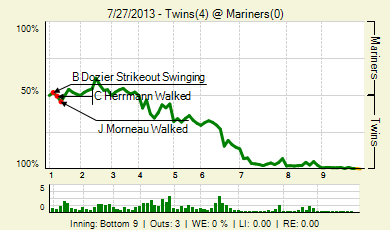