Samuel Deduno pitched his third quality start in four outings, but by the time the offense got going it was too little, too late (i.e. the bullpen had already made the game practically unwinnable).

Despite pitching a quality start, Samuel Deduno took the loss today on his 30th birthday. Deduno pitched perfectly his first time through the Yankees lineup, and ultimately gave up three earned runs--a very surmountable deficit against the 2013 Yankees. That is, unless you're the Yankees punching bag--aka, the Minnesota Twins.

The Twins got the scoring started in the 3rd inning. Our old friend Aaron Hicks led his return to the majors with a double. He was later driven in by Joe Mauer, who actually decided to play today. Ryan Doumit singled to put the Twins on first and second--but then the Twins failed to get anything else done.

The Twins had a good chance to add on more in the bottom of the 4th inning. Trevor Plouffe led-off with a walk, followed by a double from Oswaldo Arcia. Then Chris Parmelee and Hicks struck out, and Pedro Florimon grounded out--and the Twins once gain failed to get anything else done.

The 4th inning failure may have been an omen, because the top of the 5th inning wasn't pretty. Deduno gave up singles to Lyle Overbay and David Adams (wtf kind of Yankees team IS this?), and then both subsequently scored on a double by Alberto Gonzales (seriously who ARE these people!?). Before the inning was over, Gonzales was able to score on a single by Ichiro Suzuki (ok, that's a Yankee) to make the score 1-3.

That score stood until Deduno left the game and Anthony Swarzak took over in the top of the 7th. Balls were flying all over the place in a bit of a Yankee hit-parade that ended with a two-run home run by Robinson "F#$%&^*" Cano. The way the balls were flying off the Yankees' bats, it seems lucky Swarzak only gave up four runs.

The game did get a little fun again for Twins fans in the bottom of the 9th inning, when the Twins somehow forced the Yankees to change pitchers twice. Arcia led-off with a single, followed by a single from Hicks. On first and second wit no outs, Brian Dozier hit a double to drive them both in. The Yankees then substituted pitcher Adam Warren for Preston Claiborne (I've never heard of them either); but after Mauer drew a walk, the Yankees went for the big guns--Mariano Rivera, who only had to throw two pitches to end the game.

For the Twins, it was just too little, too late. 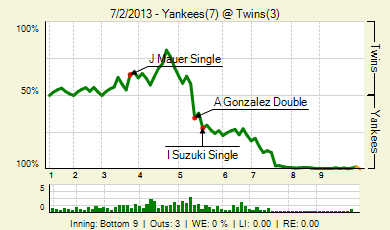