Twins starter Mike Pelfrey barely scraped his way through four innings and put the Twins in an early hole that they were unable to climb out of.

The Twins started off competitive tonight. Starter Mike Pelfrey was able to escape the Radke inning, and Joe Mauer--on the very first pitch he has seen in eight days--was able to drop a RBI single to put the Twins ahead 1-0 in the bottom of the first. Unfortunately, Pelfrey continued to struggle, allowing multiple base runners in the second. By the top of the third, the Royals broke through, scoring four runs off Pelfrey, thanks largely to a three run home run by Mike Moustakas.

Pelfrey, despite allowing multiple base-runners, was able to escape the fourth inning giving up no more runs--but that was all he would pitch (alas, he'd already thrown 93 pitches). The Twins were able to get one more run off a Ryan Doumit single in the bottom of the inning, but that was the end of it.

Ryan Pressly pitched a beautiful three perfect innings before handing the ball to Brian Duensing, who promptly gave up another home run to Mike Freaking Moustakas (at least it was a solo shot). Duensing attempted to finish the 9th, but faltered again, leading to two more runs that ultimately left the Twins in a 7-2 hole. Josh Roenicke came in to get all of the outs to end the inning, but the Twins never made it back. 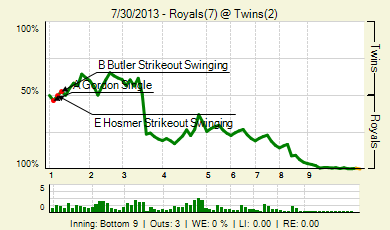