Yankees 3, Twins 2: Pitching So Close, Yet Offense So Far

A one-run loss to the Yankees is basically like a win for the Twins, right?

Share All sharing options for: Yankees 3, Twins 2: Pitching So Close, Yet Offense So Far

Yankees starter C.C. Sabathia struggled early on, giving the Twins some hope. After walking Brian Dozier to start the 3rd inning, C.C .gave up a double to Joe Mauer leading to the first run of the game. Ryan Doumit followed with a weak infield grounder that would have been a sure out, except shortstop Luis Cruz comically threw the ball over the first baseman's head. It was a nice zero out error, but of course, the next three Twins were unable to capitalize on it.

In the bottom of the 5th inning, Trevor Plouffe hit a home run to put the Twins up 2 to 0. Things were looking good okay. Despite squandering earlier scoring opportunities, the Twins were going into the later innings with just a short lead over the Yankees (stop me if you've heard this one).

Twins starter P.J. Walters had been cruising through the first 5 innings with only one hit--but then came the 6th inning. All of the Yankees you've actually heard of before came through--Brett Gardner led off with a walk, followed by an Ichiro Suzuki double, and then a two-RBI Robinson Cano double. Caleb Thielbar replaced P.J. Walters, but was unable to prevent an un-inherited run when Lyle Overbay hit a sac-fly to score Cano.

Meanwhile, C.C. Sabathia just continued to cruise. Even with over 115 pitches by the 7th inning, C.C. Sabathia was throwing pitches in the 90s mph. The Twins bats were silent. Someone should have tried bunting, just for old times sake.

The Twins bullpen amazingly avoided imploding, but the Twins offense couldn't get it together. Mariano Rivera closed out the 9th inning to clinch the series for the Yankees. Tomorrow afternoon they will go for the win. 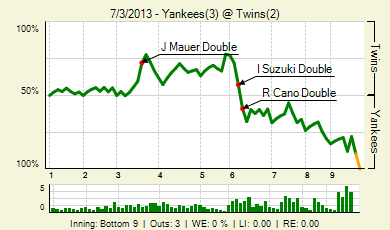