Kyle Gibson missed pitching a quality start by one run in his 3rd major league outing, going 6 innings but giving up 4 earned runs. Gibson, however, only gave up 4 hits total, and didn't really seem that bad (compared to normal Twins pitching). So there's that.

The Twins lineup, on the other hand, was not so great. The Twins manged only 5 hits and 0 walks against Rays' starter Chris Archer, who looks really young (I mean, don't you think he looks super young?), and the following three Rays relievers combined. None of the Rays pitchers actually gave up an earned run tonight--the Twins only run came via a throwing error by Ray Chris Archer (isn't it ironic, don't you think?).

The biggest testament to Gibson's resolve as a pitcher was that he was able to pitch two more scoreless innings after giving up four runs in the 4th inning. He was removed between the 6th and 7th innings, after pitching 102 pitches total. 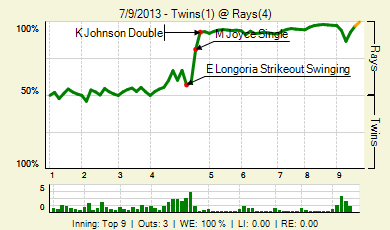