Today's Saturday Notebook looks at Jared Burton's thrown punches at Brian Duensing, some new rules we can dream up for baseball, the oddity that the majority of Biogenesis players suspended were Hispanic and what 3 Blue Jays think about it, a Royals fan's escapades into the Kauffman Stadium fountains, and Matt Garza losing his cool after Eric Sogard's wife said some mysterious things to him on Twitter.

If you happened to watch either of the Twins' games during their doubleheader against the White Sox yesterday, you may have spotted a funny occurrence happening in the bullpen. In Game 1, right as a home run by Chris Colabello hit an awning over the Twins bullpen, we spotted Jared Burton committing a cardinal sin by throwing a punch with his throwing hand. Just as bad was that he struck Brian Duensing in the face.

Then in Game 2, we saw Burton throw yet another punch, again with his pitching hand, but this time it was more violent and unclear if he actually struck someone.

So what was with the violence from Burton? Well, it appeared as though the bullpen guys were doing a video bomb of sorts. Apparently the idea came from Matt Maloney (remember him?) and on Colabello's home run, Brian Duensing was actually shouting "Punch me! Punch me!" to Burton. I mean, if you're going to be on TV, and your other option is to just celebrate the home run like normal human beings, you might as well have some fun with it no?

Now it's on to my favorite part of the Saturday Notebook, the Lightning Round (not an official name of this portion of the Notebook). It's a little small this week, but I did give you two Jared Burton punch-GIFs above, so... 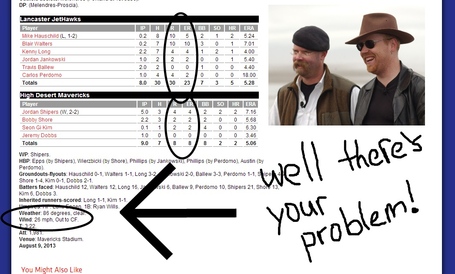