Samuel Deduno started off okay, but went on to bleed-out four earned runs (and one unearned) that ultimately put the Twins in a hole they did not climb out of.

Share All sharing options for: Indians 5, Twins 2: Deduno Didn't Quite Get it De-Done

Smauel Deduno was given the first lead tonight when Josh Willingham hit a solo home run in the bottom of the 2nd inning, but that would end up being the only Twins lead of the night--and shortly lived at that.

In the top of the 3rd inning, Deduno surrendered a walk to Ryan Raburn that did, in fact, haunt. Lonnie Chisenhall reached next on an error by first baseman Joe Mauer (Justin would've had that), which eventually led to an unearned run for Deduno when Michael Bourn drove in Raburn on an RBI ground out.

Cleveland took the lead in the bottom of the 4th when Michael Brantley drove in second baseman Jason Kipnis on an RBI single. The Indians scored another run off Samuel Deduno in the top of the 5th inning in similar piranha fashion--a double by Yan Gomes (I love this name btw), and RBI ground-out by Kipnis.

Samuel Deduno did make it through the 6th inning--although he hit a batter and then gave up a home run to Ryan Raburn in the bottom of the 6th to make the score 5-1.

Rather politely, the Indians returned the gift given by Mauer in the 3rd inning in the bottom of the 6th when Bourn's misplay of a Morneau single allowed Mauer to score from first base. Unfortunately, that would be the end of the scoring for the night, as the Indians eventually beat the Twins 5-2. 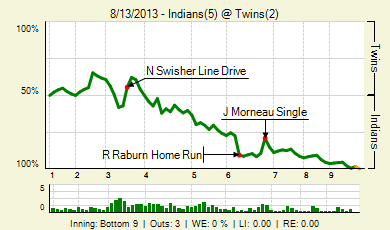