Twins 6, Tigers 3: Justin Morneau Carries the Team on his Back

After Joe Mauer was scratched late for dizziness, Justin Morneau hit a home run and drove in four runs overall to carry the team to victory over the AL Central first place Tigers.

Share All sharing options for: Twins 6, Tigers 3: Justin Morneau Carries the Team on his Back

Justin Morneau was the star tonight for the Twins, going 4-for-5 and driving in 4 runs against the AL central leading Tigers. Morneau hit his 7th home run of the month in the top of the 4th inning to give the Twins the first lead--and they never lost it.

The bad news from this game, however, is that Twins stud Joe Mauer has landed on the 7-day DL with a concussion. He was originally slotted to play first base, but got dizzy during batting practice and was scratched from the line-up. Mauer took about 6 foul-tips off his mask during Monday's game against the Mets.

Twins Starting Pitcher Mike Pelfrey also had a strong night, giving the Twins his second quality start of the season. Pelfrey gave up 3 earned runs over 6.2 innings--which in the Twins world of starting pitching, is pretty amazing.

The other highlight: Pedro "P-Flo" Florimon hit a solo dinger in the 6th inning.

It was a surprisingly nice game--wasn't it? 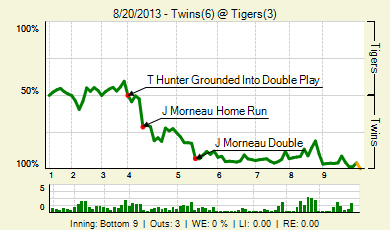