Tigers 7, Twins 1: Everything Blew Up in the 7th Inning

Twins starting pitcher Kevin Correia went 6.2 innings and gave up only 2 earned runs, but then there were "some" errors and everything went to hell.

Share All sharing options for: Tigers 7, Twins 1: Everything Blew Up in the 7th Inning

Twins starting pitcher Kevin Correia kept quite the pitcher's duel going tonight--that is, until the 7th inning. The Twins scored one run in the top of the 7th to make the score, 1-0. Correia got 2 outs into the bottom of the 7th--and the  things blew up. Kevin gave up 2 earned runs, and a duo of unearned runs (Thanks Brian Dozier!) to make the score 4-1.

To be fair: Brian Dozier made two errors in one inning, but only has three errors all year (including those two).

However, the Twins continued to act out the in-person, baseball form of human diarrhea in the bottom of the 8th inning, when Twins pitcher Michael Tonkin loaded the bases and gave up a 3-RBI double to Miguel Cabrera. That left the game at Tigers 7, Twins 1--and that's where is would end.

No really--a true hero of the Twinkie Town game threads. 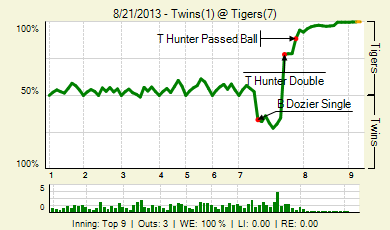