As time goes by, it becomes harder and harder for me to like Torii Hunter.

Back when he was with the Twins, he was a beloved figure. He won multiple Gold Gloves, teamed with Justin Morneau in 2006 to become the first Twins to hit 30 HR in a season in what felt like forever, and had an infectious smile and attitude. Save for a minor blip on the radar when he was upset at Justin Morneau for not playing through injuries which culminated with him taking a swing at Morneau and hitting Nick Punto instead, Hunter had been considered as the face of the franchise and a consummate teammate.

Then came the 2007-2008 offseason where the Twins decided that they wanted Hunter back, but at a reasonable price. They offered Hunter a 3-year, $45 million contract, but Hunter chose instead to take the far more lucrative 5-year, $90 million offer from the Los Angeles Angels. Ever since, it feels like one controversy after another from Torii.

I've touched on this before, including last week when I wrote about Hunter indirectly revealing that his Tigers teammate Prince Fielder was going through a divorce that was the cause of Fielder's struggles this season. There was accusing Lew Ford (whose name is now omitted from the story) of refusing to pinch-hit against Mariano Rivera, a fact that is most likely false. There was his admission that he'd be uncomfortable playing with a gay teammate and then the claim that two separate comments were spliced together (never mind they still sounded pretty bad when split apart). Or what about when he said Dominican baseball players were black imposters? And now, it sounds like he's back to fighting with teammates.

According to Scott Miller of CBS Sports, Hunter attempted to fight Albert Pujols while both were with the Angels last season. In the midst of a frustrating year, Hunter and C.J. Wilson got into an argument in the dugout after Wilson started giving hitting tips to the position players. The two settled their issues, but in a later players-only meeting, Pujols brought up the argument again. Hunter became enraged that Pujols didn't have his facts straight, and allegedly rushed Pujols who told Hunter to "shut up." However, before he could fight with Pujols, he was restrained by LaTroy Hawkins and Vernon Wells.

Hunter was a favorite of many while with the Twins because of his outgoing personality and positive attitude, but it seems like his extroverted attitude has been getting him in trouble more often lately. As the years go by, it really feels that he's become less Magnitude and more Leonard Rodriguez, and that's not just because Albert Pujols said "Shut up, Leonard Torii!"

I think no matter what, this still hasn't ruined Torii's legacy. He's built up far too much good credit in the public's collective eyes for that to happen. Nevertheless, I think I'm finally done with him as one of my favorite Twins. Nick Punto may have been irritating on the field, but at least he never picked fights or threw his teammates under the bus.

Edit: Yeah, it's a little weird that I put an edit on here before this thing was posted in the first place. It's just because I was discussing this thing with future brother-in-law and former Twinkie Town commenter TheBlackFreighter on Facebook while writing this and he made a great point that I completely agree with, and it contradicts a lot of what I wrote above.

You need character guys like Torii on your squad. He's super competitive and stirs the pot a little. You wonder why the Twins haven't won a playoff series since 2002 ... we have a bunch of brittle players with no mental mettle. And who cares if he's against a gay teammate. I completely disagree with him 100%, but at least he's giving you his honest opinion. His personality and voice is more refreshing than any soundbite that has come from any and all Twins players in the last 5 years.

For a long time I've desired having Nick Swisher as a Twin. Yes, I understand that many people are irritated by how he acts, but he's long been a person that is unafraid to say whatever is on his mind, and for his reputation he's actually stayed out of trouble his entire career. Tack on a career in which he's never had a season under 1.2 WAR and he's a great fit that could shake up a stale Twins clubhouse. Of course, I'm about 85% sure that his personality is the exact reason why the Twins front office would avoid him.

Finally, we have arrived at the Lightning Round, which features the GIFs you've come to know and love, and we even have a surprise visit from a Vine today. 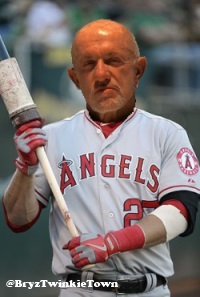