The highlight of this game was Jamey Carroll pitching the bottom of the 8th inning, which is pretty much all you need to know about this game.

Share All sharing options for: Royals 13, Twins 0: This Game Sucked (An Oral History)

Twins starting pitcher Kevin Correia manged to pitch one scoreless inning tonight before things started to get dicey. He gave up six earned runs in the bottom of the second inning.

Kevin Correia was pulled after pitching two innings, but things didn't exactly improve from there. Brian Duensing did come in and pitch three scoreless innings, but at this point almost everyone was talking about A-Rod and PEDs so they didn't notice.

The Twins offense continued to be anemic.

Despite being down 6-to-0, some Twins fans still showed optimism.

This optimism was rewarded with a brilliant catch by Twins third baseman Trevor Plouffe, which sent him tumbling over the railing on the third baseline (and he was given no help by the Royals, as noted by Corey Provus and Kris Attaberry).

Holy crap! TREVOR I LOVE YOU

Brian Dozier also had a few nice plays, but the game pressed on with no runs by the Twins. This did not go unnoticed by the Twins faithful.

So things could be going better tonight

I'm going back to the yankees game

The eighth inning is when things REALLY got interesting for the Twins. That is, in the bottom of the eighth, the Twins sent lego-headed position player Jamey Carroll out to the mound. I kid you not. Carroll marks the seventh position player in Twins history to pitch for the Twins, and he had a fairly quick inning with two pop-ups and one ground-out.

Jamey Carroll on the mound.

I wish I was home to see this!

So, Jamey gets the win if the big comeback happens here, right? 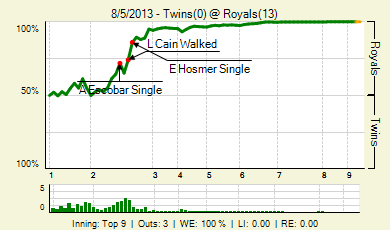