Twins 7, Royals 0: Andrew Albers Delivers One Heck of a Performance

Andrew Albers was the clear story of the game tonight--even though Ron Gardenhire had to be the PARTY POOPER and pull him from the game when Albers was only two outs away from a complete game shutout.

Share All sharing options for: Twins 7, Royals 0: Andrew Albers Delivers One Heck of a Performance

Andrew Albers made his major league debut tonight, and one heck of a debut it was. He went 8.1 innings for the Twins, giving up ZERO runs and only four hits. He was promptly bathed in the remnants of the Gatorade cooler and pied in the face with shaving cream following the last out.

Albers definitely got a lift from the great Twins start in the top of the 1st inning. Brian Dozier led-off the game with a home run, the first lead-off home run for the team since Denard Span's home run against the Phillies in June of 2012. Justin Morneau followed up just a couple batters later with his own dinger (TOTALLY CALLED IT IN THE PITCHER'S PREVIEW), this one a two-run home-run that lifted the Twins to 3-0 before Andre Albers even had to throw his first major league pitch.

Chris Colabello wasn't one to miss out on the dinger action--he launched one of his own in the 4th inning, to make the score 5-0.

The best and most hilarious run of the night, however, was in the 6th inning, when Chris Colabello scored on a balk by already really struggling Royals pitcher James Shields. This was not something James Shields was happy about, although all of us Twins fans clearly were. 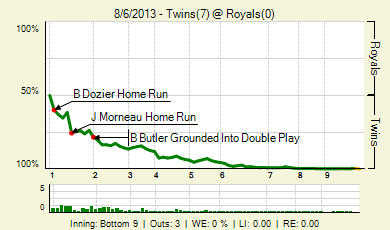