Twins starter Samuel Deduno fails to pitch at least 6 innings for the first time in two months, as I simultaneously beg forgiveness for that awful headline.

Samuel Deduno has been the Twins best pitcher the past couple weeks, but tonight was not his night. Deduno gave up four earned runs on 12 (!) hits over 5.2 innings, earning himself the loss and his shortest outing in nearly two months--but, um, he didn't give up any walks!

Things were actually looking very good for the Twins in the top of the first inning. Brian Dozier hit a triple off Danny Duffy--making his first major league start since Tommy John's surgery--and subsequently scored on a wild pitch. This also caused my Mom (Twins life-long mega-fan) to text me "woot! triple wild pitch!" because this is her preferred method of scoring (see: Twins life-long mega-fan).

The Royals tied it 1-1 in the bottom of the third inning when Samuel Deduno and Jamey Carroll's shin started to falter. The Twins again took the lead in the 4th inning when Brian Dozier doubled to score Clete Thomas. Danny Duffy was then pulled, and the Twins slide to loser-dom began.

Rightfully so, catcher Ryan Doumit was pulled before the bottom of the 4th inning began because of nausea. He was replaced by Chris Hermann.

The Kansas City Royals proceeded to break the game open with a lead-off home run from Eric Hosmer. Alcides Escobar later hit an RBI single to drive in Miguel Tejada and put the Royals in the lead. Lorenzo Cain had an RBI hit the following inning to put the Royals up by two, which is where the game would ultimately stand (let's just pretend the Alex Gordon RBI double to score Billy Butler in the bottom of the 7th never happened because this is depressing).

Bottom line: The Twins struck out a lot. And they lost.

Step it up guys for real. 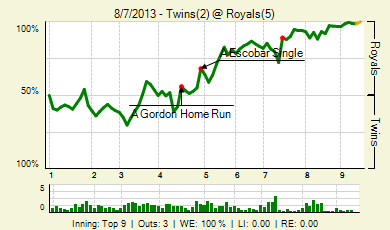