Josh Willingham showed his former team--the Athletics--tonight, launching two home-runs (including the game winner), and becoming the single number-one player with the most home-runs in Target Field history. Sorry Thome!

Twins left fielder Josh Willingham hadn't hit a home run since August 13th--but he made up for his absence tonight.

After hitting a solo home-run to start the scoring in the second inning, Willingham hit the winning, go-ahead, second deck home run in the eighth inning to score himself and Clete Thomas, and seal the deal for the Twins. And get this--Willingham was only hitting sixth for the Twins tonight.

Although Willingham was the biggest sparkle for the Twins, he wasn't the only one--Oswaldo Arcia also hit a home run blast into the second deck in the bottom of the sixth, which was equally as important to the Twins one-run win. As Twins fans, me must relish what we can get.

I'm so disappointed in you, I'm not even doing roll call tonight.

When multiple members in the Roll Call are in the single digits--I just can't. 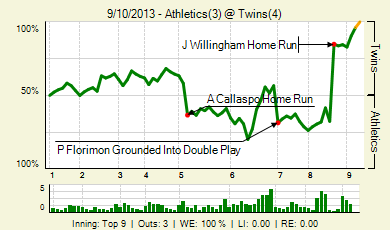