The Athletics hit 3 home runs? check. Worst defeat of the season? Check. Umpires decide to turn a foul-ball into a 2-RBI double? Check.

Share All sharing options for: Athletics 18, Twins 3: Wow, Did This Game Suck

Yeah, soooooooo, this one kinda sucked.

Let's just go over the facts. Mike Pelfrey lasted all of 3 innings, giving up 7 earned runs. You think that sounds bad? Then came the 4th inning. Pelfrey was still pitching. He gave up 4 straight hits before he was removed. And that wasn't even the half of it.

The Athletics batted around in the top of the 4th. Part of the batting-around came on what was ruled as a foul-ball by first base umpire Bill Miller but then--oops! Miller decides it's not a foul ball, AFTER THE ENTIRE PLAY, and gives the A's two runs and sends the guy to second base. Ron Gardenhire runs out to argue the BS RE-call and gets ejected. Because of course.

After the umpires gift double to the Athletics, the A's go on to score a total of TEN freaking runs in the top of the 4th inning, and by now everyone of-age and not-driving in Minnesota is having a gosh dang drink (or four). Hopefully all Minnesotan fans turned off the game and/or drank so much they never realized the game's end score was 18-3--because wow, what a horrible game.

THE SMALL TWINS HIGHLIGHTS: Minnesota Twins Catcher Eric Fry came in and hits a home run in his first major-league at-bat in the 6th inning. 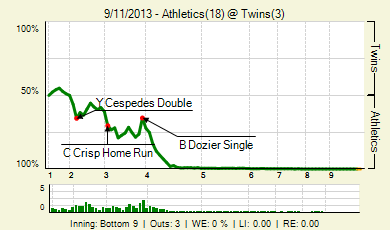