Today's Saturday Notebook looks at my softball game at Target Field last night, a new posting process that may be introduced for players going from the NPB to MLB, Jeffrey Loria doing more Loria things, the Pirates using a ton of defensive shifts to their advantage, and a couple methods that may be successful in preventing injuries to pitchers.

If you recall, nearly a month ago I got to play in the Pohlad company co-ed softball tournament. Made up of teams from many Pohlad-owned businesses, it's the largest charity donation to the Twins Community Fund every year after private donations. My usher team, the One Inning Wonders, won the loser's bracket and we ended up getting a chance to play at Target Field, and the game was held last night.

We were playing against the tour guides of Target Field, and it was a very close game. We weren't allowed to play on the actual basepaths (well, we weren't allowed to do much of anything*) but it was still plenty of fun even though it was raining the whole time. We ended up getting walked off in the bottom of the 7th when the tour guides strung together 2 hits and a sacrifice fly, and though the loss stunk, I still couldn't help but have a smile when we lined up to shake hands.

* No sliding or diving, on offense you would be ejected from the game, and on defense if you made the play, the batter would be ruled safe and your offense would start the next inning with an out. Only water was permitted on the field, no Gatorade, sunflower seeds, etc. You couldn't walk on the infield grass, and on the bench you couldn't stand on the grass in foul territory. No cleats were allowed, even my rubber cleats. Our home plate was set up at shallow shortstop, so half of the infield was dirt and the other half was grass. Our foul lines were a couple of cones, and the umpire totally blew the call on a single of mine (it was foul but she called it fair). To quote a teammate, it was still technically softball, but not....

Certainly this was a one-in-a-lifetime opportunity, because I don't know if our team will have the ability to repeat next year. Still, it's something I'll always remember for the rest of my life. Way to go, One Inning Wonders! 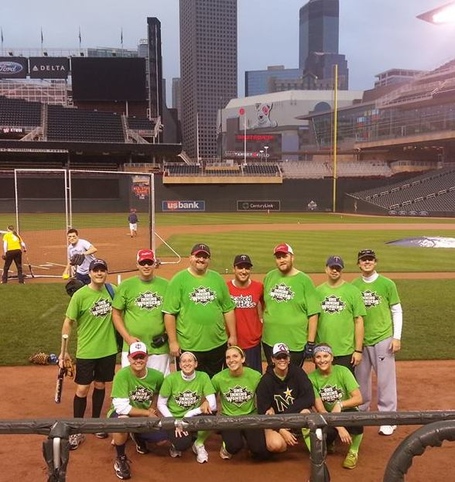 Now for our Lightning Round.