Twins 9, Astros 6: Once Again, That Was Too Close

For the second day in a row, the Minnesota Twins beat the Astros in extra innings, and I feel like it shouldn't be this hard. It's the Astros.

Share All sharing options for: Twins 9, Astros 6: Once Again, That Was Too Close

The Twins were leading 6 to 3 going into the bottom of the 9th inning, but that lead was short lived for them. Twins reliever Glen Perkins came in to pitch the bottom of the 9th, and after struggling through a few hits, gave up a 3-run home run to Brandon Barnes to tie the game.

The Twins got things going right away, when second baseman Brian Dozier hit a 2-run home run in the top of the first inning. After an errant home run by Astro Chris Carter, Twin Trevor Plouffe launched another home run for the Twinkies in the top of the third, putting the Twins ahead 4-1.

Brandon Barnes hit a two-run single for the Astros in the bottom of the 7th inning to make the game 3-4 Twins. Our boy carried the lead into the bottom of the 9th, but then the melt down started, with the, giving up 3 runs to tie the game and send it to extra innings.

Nothing got done until the top of the 12th, when Chris Colabello got a hit, then get thrown out on a bunt by Clete Thomas. Josmil Pinto then hit a double that sent Clete to third base. Ryan Doumit came up to bat next--pinch hitting for Pedro "P-Flo" Florimon. It was an intense moment for the Twins--made better when Astros pitcher Kevin Chapman thre a wild pitch that allowed Clete Thomas to score the go-ahead run from third base. Just a few outs late, Darin Mastroianni  doubled to drive in Josmil Pinto and Doug Bernier, giving the Twins the 9-3 lead they would ultimately end the game with. 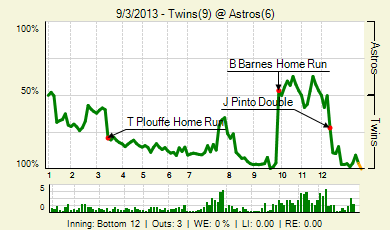