We continue to hear tale of the Twins continuing to hold interest in Bronson Arroyo. We even hear that, hey, don'cha know, they're interested in Masahiro Tanaka. The former is more likely than the latter, but hey, interest.

Earlier this afternoon we learned that there's still interest in Matt Garza.

Word from MLB contact: #MNTwins again kicking tires on Garza. Willing to pay high $. But same concern as before: don't want to do big years.

If those are the same years as the last time this was a thing, then it seems like Minnesota would be unwilling to go beyond three years for Garza. But it also sounds like they're willing to give him a little extra money for his trouble. Would three years and $54 million be something he could turn down, or is he convinced enough in his future market that he'd continue to take his chances in a post-Tanaka timeline?

Regardless, the message being sent to Minnesota's internal options is this: we really aren't a fan. It's hard to argue considering that total lack of quality starting pitching on the team last year, but in terms of adding free agents (much less just free agent pitching) the franchise is already in uncharted territory. Adding one more pitcher - whether it's Garza or Arroyo or someone else - would see the team embark upon a philosophy that feels uber-aggressive to the point of being dangerous to the future good of the team.

There are always options, of course. Kevin Correia is off the books after 2014, and one of the newly acquired free agent starters could be dealt down the line. But that's always easier said than done and it's a hard philosophy to reconcile with a franchise committed to making responsible decisions. Yes, I know that there have been plenty of irresponsible decisions in recent years, but this would be taking it to a new level.

Getting back to the front office not really liking their internal options thing though, signing another pitcher would essentially put an end to any kind of a competition for the rotation in February and March. Kyle Gibson is guaranteed to start the season in Rochester, while it'd be an early handshake and slap on the ass for Samuel Deduno, Scott Diamond, and Vance Worley. Sure, they could stick around through spring training as injury insurance or in case one of them turns into a bullpen arm, but it's more likely that they'd hit the road.

But maybe, in some strange way, it's all part of the plan. Look at it this way - if the Twins sign another pitcher...

It's one way of cleaning house, that's for sure.
The Twins could add another starter, and it could make the 25-man roster better. The money isn't an issue, apparently, at all. But the 40-man roster is still screaming for attention in certain areas, and I still can't see how signing four free agent starting pitchers to multi-year contracts in one off-season can be seen as a good thing. Even if the fourth one ends up being Matt Garza, it would only raise questions about earlier decisions.
How do you feel about this winter's all-your-free-agent-starters-are-belong-to-us strategy? 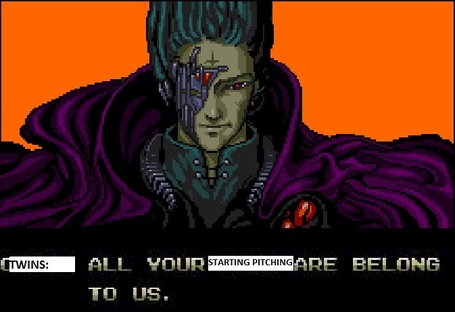