My Review of TwinsFest

I talk about the events that occurred at TwinsFest this weekend and give a recap of what I did, along with a review of the first TwinsFest at Target Field.

Share All sharing options for: My Review of TwinsFest

Last week I wrote about my disappointment that TwinsFest would no longer have any free autograph lines, something that I staked out every year for the past four years to get autographs of the up-and-coming stars before they were famous. While the elimination of these lines was a bit of an annoyance this year, nevertheless I had a great time and I think the Twins organization did a great job with hosting TwinsFest at Target Field.

Along with attending TwinsFest as a fan on Saturday, I also volunteered on Friday and Sunday, meaning I had a great chance to scout everything out during the weekend. I spent all of Friday working at Autograph Station #4 in the media room (where press conferences are held) down on the service level (i.e. basement) of Target Field. I got a chance to see Rod Carew at the very first signing, and then I was quickly shifted to working outside the line. While I first thought I wouldn't get a chance to see the players as much in the autograph line, the irony was that I was now stationed directly outside the press elevator, which other players used to jet among the three levels of the ballpark without sharing an elevator with the fans. Therefore, I actually got to see even more players up close than if I had been asked to remain inside to help with crowd control with the lines, which actually isn't even necessary.

I was given a break around 5 pm on Friday, and I used this to my advantage to scout out the rest of the ballpark in anticipation for Saturday. I must say, although the venue was smaller, the quarters more cramped, it was definitely nice to see the entire ballpark opened up for the casual fan. Normally you need a special ticket in order to visit the Champions Club, Legends Club, Metropolitan Club, or the suite level, but all of these were open to the public today. Additionally, the Twins' clubhouse was open for viewing, which doesn't even happen for normal ballpark tours, and the fact that it was one of the few free events in the ballpark made it even sweeter.

Throughout the service level where Station #4 was located, the vendors we normally see set up on the Metrodome field were set up there as well. Unfortunately though, there were significantly fewer tables set up, simply because there wasn't enough room. However, I'd argue that many of these vendors sell virtually the same items, and I still was able to find a good variety of memorabilia. That is, when you could see it, because it was pretty dimly lit down there.

Moving on from the card collectors, I stopped by the Champions Club. This is where the team houses their two World Series trophies and where the biggest ticket spenders hang out during games. TwinsFest hosted Bingo with players calling out the numbers, along with a Family Feud-style game show where two players and selected fans would compete with each other. Plus, the bars were open and some of the food stations were set up, allowing you to live the life of a high-roller on the (relative) cheap.

From there, I moseyed up to the club level. Starting in the Metropolitan Club, there were more tables set up that one normally would have found on the Metrodome turf, though these were more promoting other business ventures rather than having ties to baseball. Further along by the Legends Club, you could find Autograph Station #3, some food options, the grab bags ($15 for a wild card bag of Twins promo items, it's one of my favorites), the Twins yard sale, and the boardwalk.

First, the yard sale was a little hectic. When I first stopped by on Friday, I wasn't all that impressed. I saw mostly caps and jerseys, and I figured it was like walking into any other Twins pro shop. However, a closer look showed that there were plenty of autographed baseballs from past Twins, baseball bats, catcher's gear, framed posters and paintings, and even old nameplates from lockers in the clubhouse. When I stopped by Saturday with my fiancee, we dropped about $115 on stuff from the yard sale alone.

Second was the boardwalk. Here were a ton of games that was pretty much a kid's paradise, with baseball bowling (bats as pins and bowling with an oversized plush baseball), Plinko, an accuracy pitch, Pop-A-Shot, and bean bag toss. Even better, some players were scheduled to make an appearance throughout TwinsFest, though the schedule was not made public. Therefore, many people were surprised on Saturday when they arrived and saw Joe Mauer at the baseball bowling. I worked the bean bags on Sunday, and we were joined by Kyle Gibson and Logan Darnell for about half an hour. It was the perfect place for the children to burn off some energy, though I must say I was getting exhausted just by fetching bean bags for the same five kids over and over again...

Finally, the suite level didn't have as much variety, but it was still a popular place for many people. Autograph Stations #1 and #2 were up here, and there was also a Call-A-Friend booth (players would record either a greeting for your voicemail or make a 60-second call to one of your friends/family) and a read-along with T.C. Bear and some players. I didn't experience either of those, but I did joke with my fiancee about getting Glen Perkins to call her brother just to hear his reaction.

Now on to Saturday, where the real fun began. I'm typically not interested in autographs of current players unless they're a legit star on the team - sorry, Josh Willingham - so I had only three people on my radar that day: Alex Meyer, Jose Berrios, and Byron Buxton (I got Miguel Sano to sign a baseball and my copy of Pelotero last year, so I'm good with him for now). With none of these guys scheduled in the morning, we showed up at 11 am and went straight to the grab bags and each bought one before they sold out, as they usually do sometime on Saturday afternoon. If anyone would like a fishing lure, we now have five. One is going to a coworker, but after that, y'all can go all Hunger Games on each other for the remaining two (because of course, my fiancee and I are keeping two). 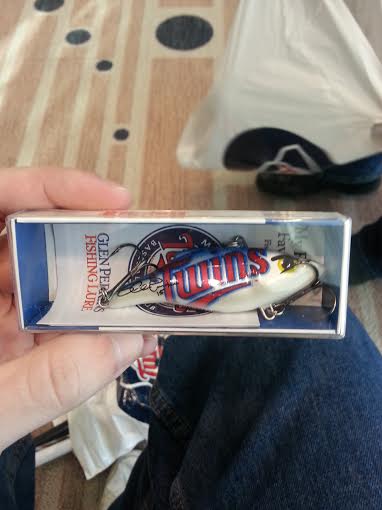 After the grab bags, we headed over to the nearby yard sale, and as I mentioned before, we dropped about $115 here. $50 apiece for the Cuddyer framed poster (which we later learned once hung in the Metrodome) and a Ben Revere canvas. 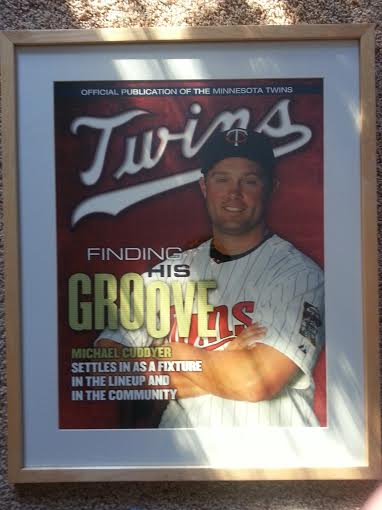 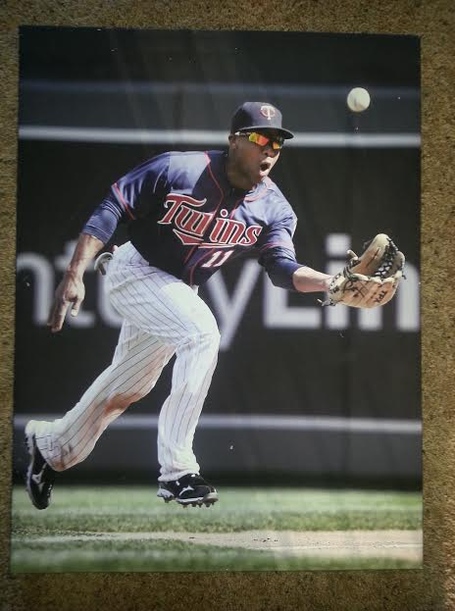 Also, $15 for the nameplate that used to hang above Luis Perdomo's locker. Hey, it was either him or Esmerling Vasquez. #ObscureTwins

PROTIP: Don't buy a ton of (expletive) unless you're okay with carrying it everywhere. Lucky for me, I have a caring boss with the Twins that was okay with letting us dump our purchases in his cubicle for the day. I should get him a gift card to Applebee's or something...

I have a display case in my apartment that contains quite a few baseball items, but the issue is that it's getting full. So while I wanted to get a baseball signed by Byron Buxton, I knew that I'd had to shift some items around if I wanted to put it inside. Fortunately though, I discovered a plaque with a picture and baseball card of Buxton on it at one of the booths in the service level, and after waffling for about 5-10 minutes, I folded and bought the plaque for $20. I then got the picture signed by Buxton later that day, and for a combined $35 I consider this the top thing I got at TwinsFest. Next year I plan on getting the baseball card signed. 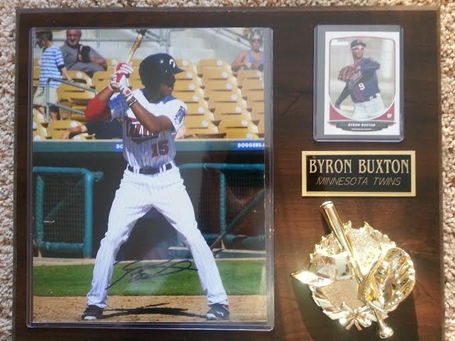 While I only wanted autographs from Buxton, Meyer, and Berrios, I had to figure out a way to not embarrass myself in front of the other players signing with them. That's when having other objects come in handy, such as this Caleb Thielbar-signed calendar I found in one of our grab bags. However, Thielbar was signing at the same time as Buxton, so I decided to see if he would sign it a second time. He took one look at the calendar and pushed it back across the table to me. No dice. 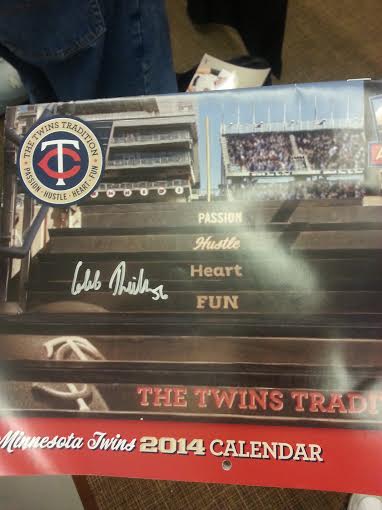 Finally, it's common for the players to get bored while they're signing autographs. Not everyone is in high demand like Mauer, Buxton, or Sano, so there's often some downtime to kill, and this means doodling on the table. For one, it's a way to make sure your markers and pens are still working, but it's more a time to entertain yourself and others. Max Kepler wrote the list of items Rod Carew wouldn't sign in front of himself. Trevor Plouffe sketched some sort of ugly penguin and labeled it "Casey Fien," but Fien himself had the funniest drawing of the weekend. 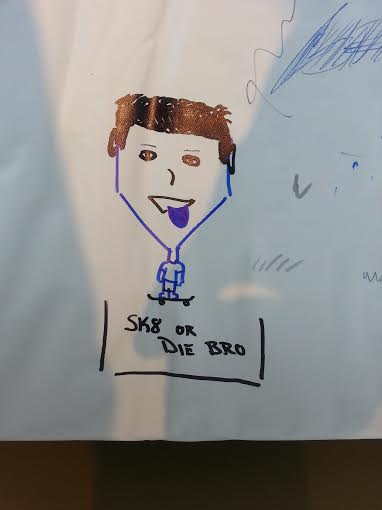 All in all, I had a great time at TwinsFest. It helps that I have a loving fiancee that was willing to wait in line for Buxton while I ran off to get Meyer's autograph, I ran into plenty of friends despite failing to correspond beforehand, overheard some funny interactions from players, and spent far more money that I wanted. Just as a quick rundown, here's what I liked and disliked about TwinsFest at Target Field this year.

- Fans got to visit many places in the ballpark that are normally closed off.

- Easy (for me, at least) to remember where everything was located, and therefore navigation was also easier.

- The boardwalk was perfect for child entertainment.

- The Twins made the very last autograph signing on Sunday with Glen Perkins free to all children 16 years old and younger.

- Cramped in some places, especially the service level

- Due to drafts or proximity to open doors, some parts of TwinsFest were frigid

- My fiancee has had her lifetime fill of TwinsFest (sorry, more a personal con than anything...)