If you didn't know better, you'd think Jason Bartlett was loved by everyone in the organization from Day One.

Nearly 12 years ago, on July 12, 2002, the Twins acquired Jason Bartlett from the Padres in exchange for Brian Buchanan. Buchanan was a first round pick by the Yankees in '94, and came to Minnesota (along with Cristian Guzman, Eric Milton, and Danny Mota) in the trade that sent Chuck Knoblauch to New York. He was supposed to mash, and kind of did, but not really. His 2001 season was fine, but Buch was thoroughly lackluster in 2002.

Basically, the Twins were giving their outfield at-bats to Jacque Jones, Torii Hunter, Dustan Mohr, and Bobby Kielty, but they also wanted to call up Michael Cuddyer. Cuddyer, in his first taste of Triple-A, was killing it for Salt Lake City: .309/.379/.594 to be exact. As the organization's top prospect and with the Twins trying to avoid fading down the stretch like they did in '01, the team needed to give him a shot.

And that, as it turns out, might have been a little ironic. Because reversing course past the history lesson and getting back to Jason Bartlett, the organization quite clearly wasn't as willing to give him the same credence. 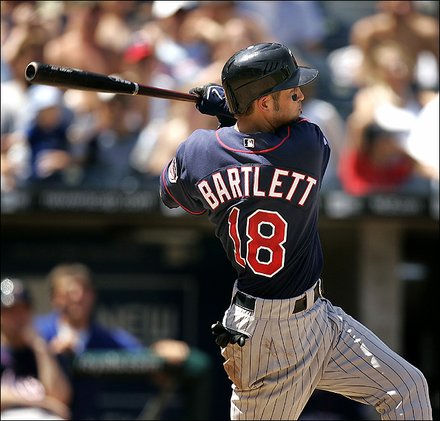 In 2004, Bartlett hit .332/.414/.470 as a 24-year old in his first taste of Triple-A baseball. The Twins called him up for a cup of coffee in September, and it was assumed going into 2005 that this flashy Californian kid with speed and a nice eye at the plate would get his opportunities.

To be fair, he did get his chance. Bartlett made the team out of spring training and started at short on Opening Day. But he was struggling at the plate, hitting just .242/.310/.374 through the middle of May, and he was returned to Triple-A to work things out. It's a standard tactic.

Bartlett, meanwhile, tore the cover off the ball in Triple-A. In 61 games for the Red Wings he crushed it, to the tune of a .332/.405/.459 triple slash. Minnesota promoted him for August 1, and he started 32 of the team's final 40 games. It was all justifiable and it was method-as-expected. It was certainly frustrating to see Bartlett get sent down for half the season, but he did struggle and he did get recalled when he proved there was nothing left for him to learn in the minor leagues.

Then came 2006, and this is where we need to really think about how highly Bartlett was regarded within the organization. In spite of Bartlett's impressive showing with the Red Wings for the prior two seasons, and in spite of Terry Ryan announcing "he's got nothing more to prove at Triple-A", Bartlett didn't make the team out of spring training. He hit .375 with a .450 on-base percentage, the Twins were giving third base to Stonewall Tony Batista, and they still gave short to a now 34-year old with diminished range in Castro. The mantra from the front office was that Bartlett wasn't doing the "little things good enough" and that they wanted him to act more like a leader.

Batista lasted one day longer on the team than did Castro. Minnesota cut their losses on their fading shortstop after 50 games and a .231/.258/.308 performance. Jason Bartlett started every single game at shortstop for the rest of the season, rewarding the team with a .309/.367/.393 performance.

Bartlett would spend just one full season as the team's everyday shortstop before being shipped off, along with Matt Garza, in the ill-fated Bill Smith trade that brought Delmon Young to Minnesota.

In December of 2012, Gardenhire would tell Rhett Bollinger that "he was never in favor of sending Jason Bartlett to the Rays". When news came out last week that Bartlett was retiring but had interest in coaching, the front office made it sound like they were hopeful they'd find a spot for him in the future.

Where and when did this change of heart take place? The Twins organization jerked Bartlett around pretty good over the course of three or four years, culminating in his trade to Tampa Bay. In terms of getting sent down and getting called up, we all know how active Gardy is in that process so it's also difficult to pin the blame on just the manager or just the front office. But apparently, at somewhere in the sordid history of one of the best shortstops the Twins never barely had, Bartlett gained a fan club.

It was time for Bartlett to leave the game as a player. We saw it in spring training, and although he gave one hell of an effort, his last game really spelled it out: two diving attempts made on fly balls at an unfamiliar position, ending in two belly flops.

He had one great offensive season, and for four or five years he was also a good defensive shortstop - all things this team could have used. I'm glad that, in the end, the organization had an appreciation for Bartlett, and that Bartlett, in turn, holds no ill will towards the Twins. It's good to see the kind words and the positive personal reviews. I'm glad that the chapter is closed.

In some ways, I think the sentiments mean more by remembering the journey that brought us here. Good luck, Jason. I'm sure we'll see you around.