Samuel Deduno's "crazy" fastball has been a hot topic as he managed to succeed in the majors despite less than desirable strikeout-to-walk rates, but it appears as though he may have finally learned to harness its movement.

"My name is Sam Deduno and I have a crazy fastball."

That was how Deduno introduced himself to the Twins organization back in 2012, and it wasn't long before everyone else noticed, regardless if you were a coach, a player, or a fan. His fastball featured movement unlike any other's, where despite a 4-seam grip, it moved more like a heavy sinking 2-seam fastball. In fact, the Texas Leaguers website showed that the average righthander's fastball had about 9 inches of run into a righthanded batter and about 6 inches of "rise" (represented by the large black circle in the picture below) over the 2012 and 2013 seasons. Meanwhile, Deduno's fastball came in at about 2.5 inches of run and about 2.5 inches of "rise" in the same time frame. 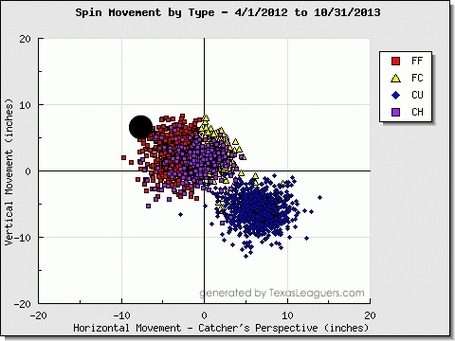 While Deduno's fastball was more of a sinking fastball, it certainly didn't have as much run as your typical sinker, but that wasn't just what made his fastball crazy. No, it was that he could also give it some cutting action, though he had absolutely no control on when to deploy it. See those yellow triangles hiding in the above picture? There are actually far more than you can see (they're hidden by the change-ups) but Deduno could also throw a cutter. The only problem was that even he didn't know when it would come out, so hitters and his catchers alike were left guessing what he was trying to throw.

Though Deduno didn't know where his fastball was going upon release, it was pretty easy to guess where it was going to go after the batter made contact. Thanks to the unpredictability of his fastball and his sharp curveball, Deduno was able to induce a grounder nearly 60% of the time, an elite number for a pitcher.

Since reports made it sound like Deduno had no idea where his fastball was going, this trend that I noticed is especially puzzling. Whether by accident or on purpose, Deduno's fastball has been cutting an awful lot this year.

From the 2012 and 2013 seasons, threw his 4-seam fastball 37% of the time while the cutting fastball checked in at 24%. However, this year it's been almost all cutters, as Texas Leaguers counted them as being half of his total pitches, while the 4-seamer has only been thrown 15% of the time.

I don't really know what to make of this. Pitchers are known to tinker all the time and often will use a new season as an excuse to try out a new pitch, or start relying on one over the other. Glen Perkins is a notable Twin that added a slider to his repertoire back in 2008, eliminated his curveball the following year, and now his slider makes a deadly pairing with his mid-90s fastball. But I feel Deduno is a different story, since it's not like he's doing this on purpose. At least, that's the case if the stories of him not knowing how to control his fastball are true.

I did wonder if maybe this was just some random variation, so I checked if he had ever had a one month stretch with similar pitch usages. Perhaps he'd occasionally get into a groove where he threw mainly straight fastballs and maybe other times he consistently threw some cutters. However, in every one month snippet I checked, his fastball to cutter ratio wasn't much different from the 2012-2013 sample I used with the exception of June 2013, and even then it was 28% to 31%, a far cry from the 15% to 50% he's shown thus far this season.

This may not seem like a big deal, but it's these kinds of things that fascinate me about baseball. It makes me wonder if Deduno figured out how to control his pitches and has been trying to throw more cutters now, or maybe something with his throwing motion is slightly off which is causing the ball's rotational axis to be a little different from in the past.

Whatever the cause, it will be interesting to see how this affects his numbers for the remainder of the season. While his fastball may no longer be crazy, Deduno still remains one of the most interesting pitchers on the Twins staff.