Dodgers 6, Twins 4: Minnesota Comeback is Too Little, Too Late

Gibson had a hard time finishing innings, and it cost him runs. Not that his offense had his back.

Share All sharing options for: Dodgers 6, Twins 4: Minnesota Comeback is Too Little, Too Late

Kyle Gibson's final line in no way accurately represents what kind of a night he had. In some senses it's too harsh, ignoring how efficient and effective he was for the majority of the game. On the other hand it's also too kind, showing that he may have gotten further that he may have deserved.

For six and two-thirds of an inning, Gibson had allowed two runs. It was a 2-1 game at that juncture, but Gibson couldn't record the final out of the inning and his relief, Michael Tonkin, allowed both of his inherited base runners to score. It was 5-1 by the time the Twins came to bat, and with how the offense had performed the entire night a comeback didn't look promising.

Staying on Gibson, it took him five batters to get the third out in the third inning, when the Dodgers plated two - including the challenged Drew Butera phantom tag play. It took Gibson two tries to get the third out in the fourth, albeit Eduardo Escobar's throw was to blame in that instance. In the fifth it took him three batters. And in the seventh, of course, he was pulled before he could record that pesky third out. 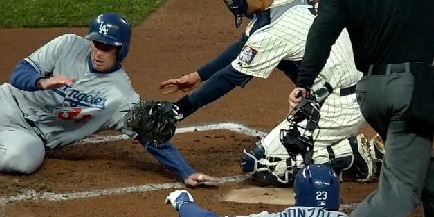 The Twins had their highlights. Escobar had a career-best four-hit night, even if he was gunned down in the second when he tried to extend his run-scoring double into a triple. Jason Kubel made a diving catch in the top of the third when the Dodgers had already scored two and were up 2-1; it was an incredible feat, particularly for someone so unathletic in body type, to make that play on what looked like a sure-fire two-run Texas Leaguer. Brian Dozier made a brilliant play in the top of the fifth, when a one-out grounder took a funny hop off Mauer's glove - Dozier made an apparent hyper-jump through a wormhole to somehow get behind Mauer, lay out, and flip the ball using his glove to a stretched-out Gibson at first base. And on that play where Butera magically slid around Kurt Suzki's swipe tag? Kubel made one hell of a throw from pretty deep in left field.

In spite of how well Gibson did in terms of not allowing runs, at least until late in the seventh, he only had three swinging strikes all night. Even on one of his strikeouts, Suzuki caught a foul tip. Yasiel Puig in the fourth, Matt Kemp in the fifth, and Butera in the sixth were the only players to fully swing and miss in 101 pitches. Considering how cold it was last night I don't think it's anything to make too big of a deal for, but it's certainly a reason why Gibson wasn't as effective as he could have been in last night's game.

The game was also a great example of what happens when the Twins don't walk. They managed just a pair of free passes, and so when they were 4-for-16 with runners in scoring position there weren't as many runners on base as we've been accustomed to seeing.

At any rate, today we play two. I don't care how cold it is, double-headers are a beautiful thing no matter what the weather. We'll see you here for two game threads today!

Studs
Hmm...was even Escobar worthy of a stud? If anybody was, it's him, but I'm not convinced
Purgatory
Brian Dozier
Trevor Plouffe
Jason Kubel
Eduardo Escobar
Kyle Gibson
Duds
Michael Tonkin