Sure, Detroit is the better team. But they weren't this weekend.

When you're a good team, you chalk up losing a series to a team with less talent to small sample size or, at some point because even amazing teams lose 65 times a year, just "one of those things." For a team like the Twins, who continue to be just pesky enough that they can't be entirely written off just yet, it's a reminder that the team can win on any given day.

The Tigers were on the board early, scoring a run in the first and another in a very long and complicated fourth inning. Ian Kinsler has had a hell of a series and led off the fifth with a solo shot, putting Detroit up 3-0. By that point, only (another) Eduardo Escobar double made it seem like the Twins had any chance of scoring at all. But the team broke through with a pinch hit Texas Leaguer from Danny Santana in the seventh, setting up the big eighth.

Brian Dozier took a first-pitch Joba Chamberlain fastball for the team, stole second, and Joe Mauer walked to put runners on first and second with nobody out. After back-to-back strikeouts from Trevor Plouffe and Chris Colabello, Josmil Pinto laced a single into left field that got by Rajai Davis. Dozier and Mauer scored to tie the game, and then Eduardo Nunez singled up the middle to bring home Pinto for the go-ahead run. The Twins locked it up, and come away with another series victory.

Gardy was ejected for the 69th time in his career, by Joe West. With the bases loaded in the fourth and the Tigers already up 1-0, Andrew Romine hit a grounder heading directly for Escobar at short. The ball hit Austin Jackson, who was called out for interference; all base runners returned to their point of origin, bar Jackson. Gardy argued that the play would have been a double play had Jackson not interfered, but Joe West (who was the crew chief) came over and took over the conversation, backing up Gardenhire until Gardy clearly said something Cowboy Joe West didn't like. 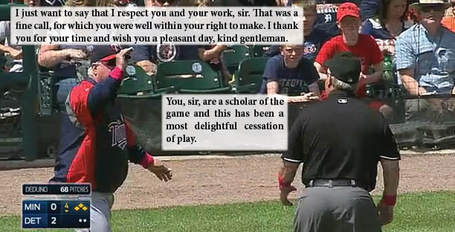 From the Official Baseball Rules:

(f) He is touched by a fair ball in fair territory before the ball has touched or passed an infielder. The ball is dead and no runner may score, nor runners advance, except runners forced to advance.

Essentially, the umpires made the right call. Whether or not it was in West's best interest or within his discretion to get involved in that conversation as he did, well, it's Joe West. He doesn't care what you think, and could be sitting in nothing but chaps and spurs drinking a sarsaparilla at this very moment.

With that, however, I'm willing to call it a night. The Twins won, and Joe West will be considered a jerk even if he wasn't - these are two truths about today that are self-evident, and let's leave it at that. WOO! TWINS WIN!