Somebody's been eating his Wheaties.

Share All sharing options for: Taking a moment to congratulate Ben Revere

Maybe taking time out of my writing/real life schedule to congratulate a guy for hitting his first career home run - a player that isn't a member of the Minnesota Twins, by the way - feels a bit disingenuous. I don't feel that way, mind you, but maybe you do. But Ben Revere used to be a Twin, he's a really great guy who is easy to cheer for, he's had one hell of a frustrating season and needed something to go right, and hey - the first time you achieve something great, you should be congratulated, too.

It's arguably better to congratulate the guy who hits 30 home runs a year, of course. Albert Pujols did it every year from 2001 through 2012, and will probably do it again this year. Adam Dunn did it from 2004 through 2010, then did it again in 2012 and 2013. That kind of production puts those guys on a rare level, while the list of guys who have simply hit a home run is, it's safe to say, significantly longer. In the grand scheme of things there's nothing special about Revere's only career home run, other than in the historical significance of how long it took him to get there.

And I can't argue with that. But it's worth praising relative achievements, too. Pujols and Dunn are like the students who consistently get A grades - they deserve praise and shouldn't be taken for granted. But the D student who manages to work hard and pull out a C should get his due as well, because it's great when people do something they're not capable of under normal circumstances.

If you want to know how Boone Logan felt giving up that homer to Revere, the best analogy I can give is to whip out another Ken Griffey Jr. Presents Major League Baseball reference. Sometimes, guys with just one or two home runs (which typically meant a power rating of a 2, which is the equivalent of the strength provided by an infant that is expected to land an Airbus 330) would shock you with a bomb. You got angry if your friends were there to see it, but if you were alone you only felt shame as that damned home run trot rubbed salt in the wound. 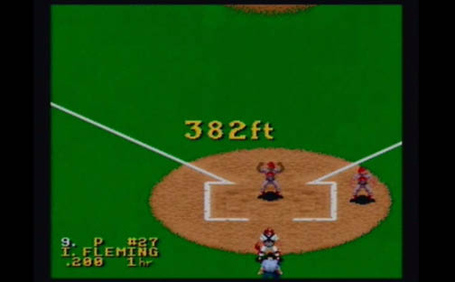 That little dude flexing his muscle with one home run? That's now Ben Revere. Go on, son, you flex!

Sure, it took him 1,565 homerless plate appearances to finally pull one over the fence. Sure, it only would have been a homer in six ballparks around the league. But he still comes out better than Jack McCarthy. McCarthy, between 1901 and 1907, went 2,470 plate appearances without a homer. Now the countdown begins to see if Revere will crack the list for the most plate appearances in a career with just one home run. Good ol' Al Newman is seventh on that list, collecting one homer in his 2,409 career plate appearances.

Anyway, congratulations to Ben Revere on getting off the skid. It was a great moment and fun to watch, and that moment couldn't have come to a better guy. Also great: that it was a ball over the head of also-ex-Twin Michael Cuddyer.