Minnesota Twins starting pitching has been something of a running joke in Major League Baseball over the last couple of seasons, and with good reason. Too many good reasons. The story hasn't been too different in 2014, barring Kyle Gibson, but over the weekend the trio of Ricky Nolasco, Kevin Correia, and Phil Hughes all turned in solid performances. All told, the three amigos combined for 22.1 innings and just six earned runs, for a 2.42 ERA. The only struck out 12, but they also just walked one.

For his part this afternoon, Phil Hughes went six and a third with two runs allowed. Both came off the bat of Nelson Cruz, who belted his ninth homer of the season in the sixth. It was a two-run shot that cut the Orioles deficit to one, but they were the only two runs Baltimore would manage. Hughes struck out three and didn't surrender a walk, and the only time he was really in any kind of trouble was when he allowed back-to-back one-out hits to J.J. Hardy and Delmon Young. But in the end, Caleb Thielbar put the inning (and perhaps the game) to bed by snagging a hot grounder off his shoe laces.

On offense, Brian Dozier, Trevor Plouffe, and Kurt Suzuki did a lot of the heavy lifting. Plouffe ripped a double down the third base line to score two in the third and open the scoring. But that fifth inning? It was a hot mess. Which, if you're a Twins fan and you like hot messes, it was 20 minutes well spent.

Dozier led off with a walk and then stole second base. Four batters later he stole third when the Orioles were shifting on Jason Kubel and Manny Machado was, essentially, fifteen feet off second base. It wasn't even on the pitch - Dozier saw nobody was around and just took off. But Kubel walked anyway, as had Plouffe before him, and Kurt Suzuki worked the count full before earning a bases loaded walk on a fastball that nearly took his face off.

It was a very typical Twins-In-2014 inning...scoring without picking up a hit.

After a Chris Colabello double and another Kubel walk in the seventh, Suzuki lashed a double just over the glove of Cruz in left field. Colabello came around to score and Kubel was waived in as well - all the way from first base, which is hilarious because Jason Kubel - and on a strong throw and relay it looked like Matt Wieters had the plate covered. But Kubel was called safe, and the challenge confirmed the call on the field. 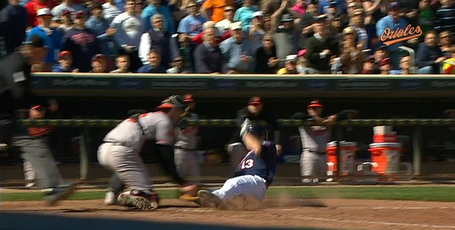 Wieters actually tagged Kubel in the balls. You can see here that Kubel's left foot was on the plate, and Wieters' glove is still en route to Kubel's jewels. It wasn't a pretty slide, ladies and gentlemen, but it was glorious in its awkwardness.

Glen Perkins shut the door for his seventh save of the season, his first in eight days. The win lifts the Twins to 14-15, keeping them square in the middle of the pack of the AL Central. Up next is a trip to Cleveland, where the Twins will have another opportunity to shake things up in the division. See you in the morning!